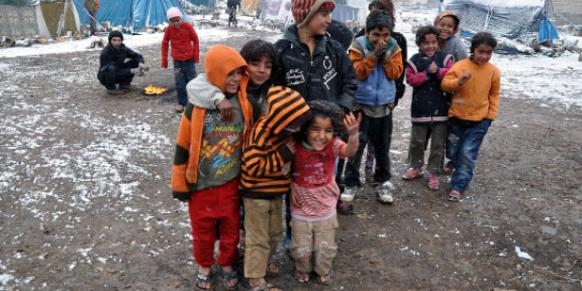 With the arrival of winter weather and snowfall last week, increased hardship lies ahead for approximately 1.6 million Syrian refugees who have fled to Turkey since a civil war erupted in Syria in 2011. As a cold front moved into Turkey from the Balkans, cities in western and central Anatolia saw icy temperatures, hitting record-low levels. The temperature dropped to -5 degrees Celsius in İstanbul, while it decreased to -8 degrees Celsius in the northwestern province of Çanakkale. As snow covered much of the region throughout the week, questions arose over how the refugees will survive the tough winter in tents. Speaking to Sunday’s Zaman on the phone, Yasemine, the director of a charity group called “Help the Syrians in İstanbul,” drew attention to the fact that many refugees crossed the border in late September. “It was still summer and they ran for their lives in summer clothes. Now, the conditions have changed and winter has come. What we see is that those people have almost nothing to wear and are trying to survive under really [harsh] conditions,” Yasemine said. According to the Prime Ministry’s Disaster and Emergency Management Directorate (AFAD), the number of Syrians in Turkish refugee camps and cities has reached 1.6 million. The Turkish government was initially praised for its open-door policy towards Syrian refugees and its humanitarian work in its camps. However, complications have arisen since only 30 percent of the refugees live in the 22 state-run camps, and the government does not supply the rest who live outside the camps with shelter or food even though winter has arrived. “Last week we visited some of İstanbul’s neighborhoods where many Syrian families live under very difficult conditions. When we entered a one-room flat on the basement floor, I saw a man wrapped in a wool blanket together with two kids, trying to keep warm in the bitter cold. Despite the freezing weather, the children did not even have a pair of shoes on their feet,” Yasemine said. The United Nations Children’s Fund (UNICEF) released an announcement on its website last week asking donors for $500 million to shelter, feed, clothe, vaccinate and otherwise care for the humanitarian needs of the Syrian refugees in host countries, including Turkey, and the millions of people who have been displaced within Syria. Rifad Kadiri, 23, who lives in İstanbul’s Yenibosna neighborhood, is a Syrian refugee who is fighting to survive. “Me, my mother, two of my sisters and my niece live in here [a small room]. This place has no kitchen, toilet, heating system or bathroom. I was told that this place was a store before. This is what we can afford under [our] current condition. We have been living in these conditions for more than a year,” Kadiri told Sunday’s Zaman. While the cold weather is the biggest problem facing the refugees, it is not the only one. Syrian refugees are denied legal access to the labor market, and their essential needs are not being met by public agencies or civil society; in order to survive, most Syrians must work illegally. And although it appears that the Turkish authorities generally tend to turn a blind eye to this type of work, refugees from Syria are vulnerable to exploitation at the hands of employers. Amnesty International, a human rights watchdog, released a written statement last week in which it accused countries hosting Syrian refugees — including Turkey and Lebanon — of failing to offer protection to them. Amnesty International called for a global resettlement surge to relocate 380,000 Syrian refugees from the main host countries by the end of 2016. At least half should be resettled by the end of 2015, it proposed. According to the Office of the United Nations High Commissioner for Refugees (UNHCR), a total of 378,684 refugees in the five main host countries are in need of resettlement. If the suggested resettlement takes place, it would make a significant contribution to the well-being of Syrian children, men and women, who would be able to resume their lives in dignity elsewhere. Five countries — Turkey, Lebanon, Jordan, Egypt and Iraq — are hosting 95 percent of the refugees with very little in the way of burden-sharing by the international community. More than 45 percent of the populatıon of Syria that fled the country has taken refuge in Turkey, while the figure is nearly 25 percent in Lebanon. According to official figures, approximately 200,000 people have died in Syria since the war began. Almost 5 million people have fled to neighboring countries and approximately 8 million people have abandoned their homes and sought refuge within Syria. Therefore, almost 12 million Syrians have been directly affected by the conflict. Considering the fact that Syria’s population before the crisis was 23 million, the numbers add up to almost a half of the country being affected by the crisis. Amnesty also asserted that Turkey maintains an open-border policy for Syrians; however, in reality, official border crossings are only open to refugees with passports or urgent medical or humanitarian needs. The report further claimed that many individuals seeking to flee Syria are being denied access to Turkish territory, and those who cross the borders illegally are at risk of abuse such as being fired on with live ammunition, torture or other ill-treatment. Yet, it is a fact that one way or another, Turkey has been sheltering 1.6 million Syrians without help in shouldering the burden even though the influx of so many Syrian refugees to Turkey has brought social and economic tension. In provinces where Syrian refugees live on the streets, an increase in criminal activities such as theft, begging, fraud and prostitution has been reported, especially among Syrians who have moved into urban areas