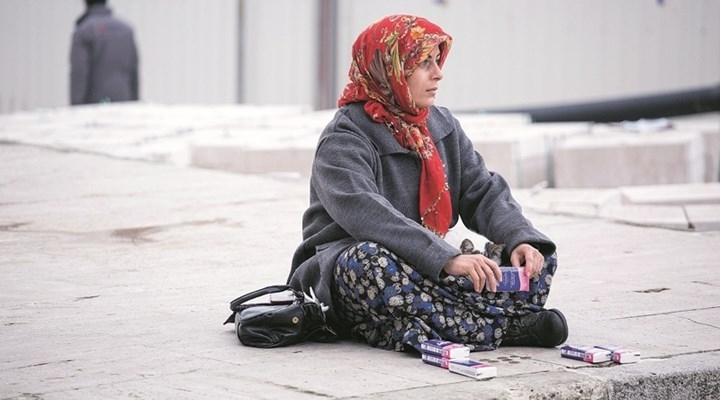 Close to 2 million refugees have moved into Turkey since the uprising against Bashar al-Assad in 2010. The arrival of the Islamic State of Iraq and the Levant has made matters worse. Entering from Turkey’s southeastern border, many have flocked over to the western provinces — as far as İstanbul. While the state does provide shelter, it is simply not enough to cope with the vast numbers. For them the only outlet left is the streets, where they have to beg for money, or at least try to sell napkins. Their presence is an everyday fact of life. Yet the question remains of whether or not Turks have been able to comprehend the severity of their circumstances, or empathize with them. What do the Syrians on the streets go through? Prominent Turkish actress Seda Çavdar donned a traditional outfit — a flowered headscarf combined with regional makeup — and went undercover to live life as a Syrian war refugee in the streets of İstanbul’s Aksaray and Fatih districts, in the old part of town. Her experience indicates that there is still much prejudice against Syrians, and little or no tolerance whatsoever. It’s cold and there is no place to stay The first task was to search for a place to stay. She pretended to know little Turkish and carried a sign stating she was a Syrian in need for help. The actress asked at numerous shops in the streets if anyone knew of a place to stay. She got no answer, and quickly upgraded to real estate agencies to see if they might show her a place. Her visits and inquiries were met with indifference and assumption she would have no money. “When I asked if they had any home on the market, they looked at me and said ‘how on earth are you going to be able to rent one’… Not one person showed me a place.” “Some stated that there were no homes for foreigners, not even feeling the need to stand up or walk over to talk to me when I entered their offices.” Çavdar states that in other instances, some blatantly lied saying there were no homes available for rent even though there were ads posted all over the wall. “When pointing to the ads, some told me to hurry up and leave, stating ‘I don’t have time to waste on you’.” With no place to stay and left out in the cold, Seda Çavdar went on the job hunt, inquiring with shops and clothing stores to become a cleaning lady. “Mostly, ‘boss – not here’, and ‘No one will give you a job’, were the standard responses,” she said. When she asked if it was because she was Syrian, she got no answer. Next, hunger struck. Holding up a sign in Turkish which read ‘I am Syrian I am hungry, help me, for the love of Allah’, she walked past bakeries and restaurants. “What more help do you guys want,” heckled one. Others just stared. Like most Syrian refugees the last chance was to try to sell some napkins, to try and not come off as a beggar. She took a spot near one of the most crowded area, by the Fatih Mosque. A women passed by fed the cats, and yelled at Çavdar, who was petting one, “you better not have this cat on your lap when I return.” Çavdar was next hassled by a security guard. But there were also new friends to meet, including two Syrian boys. One’s father had been killed in the war by bombs. “Another lost two siblings and so forth…” she said. Çavdar describes it as the strangest day of her life, “from every look, every person who turned away, every slur yelled out assuming I did not know Turkish, every feeling of pity from onlookers… the closed doors, the cold of the ground.”