A VIEW ON THE SYRIAN REFUGEE CRISES IN JORDAN 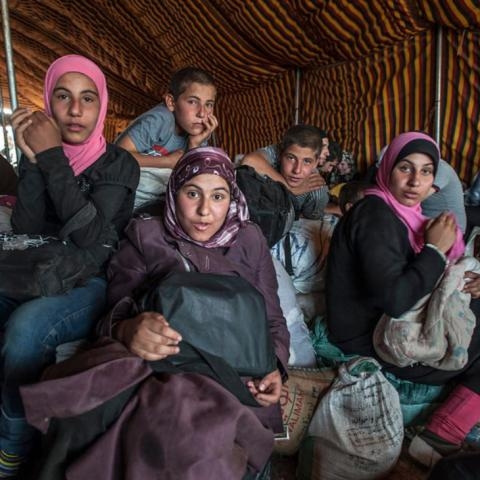 During visits to Amman, Malfraq, and the Zaatari refugee camp, our delegation met with the staff of numerous organizations providing assistance to Syrian refugees throughout Jordan. While each of these meetings added to our understanding of the overall situation, the most impactful encounter for me was the time I spent with two Syrian women whom I will call Sara and Natalia. Sara told us that her family had lived comfortably in Syria and that one of her biggest concerns used to be shielding her children from violent images on T.V. That all changed once the fighting began and she could no longer hide violence by turning the T.V. off; now it was happening all around them. Almost two years ago, Sara’s husband was wounded and the family was told he could undergo surgery in Jordan. The family has been living in Jordan for a year and a half and he still has not received the care he needs. Sara summed up her situation by saying that she felt as though she used to live in the sky, but now she has crashed to the ground and the fall has been difficult. Natalia shared with us her frustration about Syrians being barred from working in Jordan. Her husband is an engineer and would be able to find a job if he could work legally. Natalia’s frustration is one shared by almost all displaced Syrian because refugees are, for the most part, not permitted to work. The prohibition against working increases the financial burden on Syrians, perpetuates reliance on aid, and creates stress within families. Natalia shared with us that her husband is angry every day and the entire family feels that anger. Above all, both women shared a deep concern for their children’s well-being. Syrian children are permitted to attend Jordanian public schools, but the facilities are overcrowded and there is resentment toward outsiders. Sara and Natalia worried about the emotional and physical abuse Syrian children face at school, where teachers often do not intervene, and in some cases, are abusers themselves. Sara was upset that her son, who used to love school, no longer wants to attend because his teacher takes no interest in him. Natalia fought back tears as she told us a story about a Syrian teenager who was beaten at school. It is this concern for their children that is driving the families to seek resettlement today. Both families initially declined resettlement, in hope that they would return to Syria. Now, with the conflict entering its fourth year and with life in Jordan becoming increasingly difficult, resettlement has become an appealing option. Natalia told us that she sees her neighbors who are selected for resettlement as the “lucky ones.” Spending time with Sara and Natalia and hearing first-hand of their trying experiences gave me a deeper understanding of the incredible difficulty they are going through. It also reinforced the importance of the advocacy efforts of organizations like HIAS, which are working to increase protection for refugees and to improve the refugee resettlement process in the U.S. I hope that through my role as Policy Advisor I may be able to play a part in offering hope for Sara, Natalia and the thousands of other Syrians in Jordan.