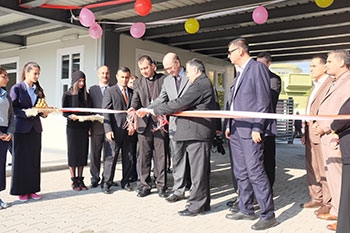 On Thursday 11th December, a school for Christian children was inaugurated in Erbil-Ankawa. This is the first of a total of eight schools funded by Catholic charity Aid to the Church in Need. The charity’s President, Johannes von Heeremann, had come to attend the inauguration in the Christian district of Erbil, Ankawa. “For our organisation the education of children is the top priority. We must not allow conditions to develop in Iraq such as prevail in Syria, where children have sometimes not been attending any kind of school for years. This leads to lost generations with unforeseeable long-term consequences. I am therefore very happy that, by inaugurating this school, we can make a small, but important contribution to safeguarding the Christian presence in Iraq,” Johannes von Heereman stressed on Thursday in Ankawa. The school project is being supervised by the head of the charity’s middle east department, Fr Andrzej Halemba. “We have provided about 2 million euros for the school projects. The schools cannot cover their needs, of course. But it’s a beginning. The ecumenical cause is also being supported. One school in Dohuk will serve primarily Syriac-Orthodox children. In addition Yazidi children will also be able to attend our schools.” Fr Halemba went on the stress that the communities taking the refugees in would therefore be relieved of some of their burden. “After all, many school buildings have been used and are being used as accommodation for refugees. The schoolchildren’s parents feared that their offspring’s schooling would be interrupted. This led to tensions. These can now be reduced,” according to Fr Halemba. “The schools are giving parents and children fresh hope. They are a further argument for staying in the country they love.” The Chaldean Archbishop of Erbil-Ankawa, Bashar Matti Warda, thanked Aid to the Church in Need for their support. “This is an important contribution to giving our refugees new perspectives. We wish to thank all benefactors for their generosity.”(Left to right: Archbishop Nona from Mossul, ACN President Johannes von Heeremann, and Archbishop Warda from Erbil inaugurate the new School in Ankawa on 11th of December 2014. It was financed by ACN and will serve Christian refugee children. Around 450 children will attend school in the morning and 450 in the afternoon © Aid to the Church in Need) The school, made of prefabricated parts, will be the first of a total of eight schools in the Iraqi provinces of Dohuk and Erbil. In January of next year it is intended that they will all be in operation. In all, about 7,200 mainly Christian children are to receive instruction in this way. There will be two shifts, morning and afternoon, and in each about 450 children of all grades will be taught. They will be taught by teachers from the Christian places now occupied by ISIS. The central government in Baghdad will pay to maintain the teaching staff. The classrooms are to be used not only for school teaching, but also for catechistic instruction and other Church activities. Since the ISIS terrorist militia advanced into northern and western Iraq in June this year, more than 100,000 Christians in several waves had to flee from their home areas and leave everything behind. They mostly found refuge in the northern Iraqi region of Kurdistan. The bishops fear there will be an increasing exodus from Iraq if the people cannot be offered a perspective quickly. Aid to the Church in Need has therefore made available aid to the tune of 4.6 million euros for the persecuted Christians in this and the previous year. This includes, among many other things, the acquisition of mobile homes and the provision of food.