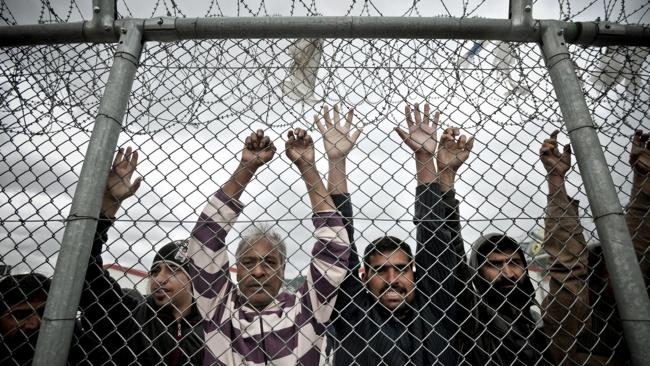 Syrians who reached Greece said they convinced Athens to provide them with official resid­ency papers. Once they had these, they were able to book flights to northern European countries more generous to migrants. The arrangement suited both parties, it is alleged. The Syrians did not want to settle in Greece, because the economy was in crisis. Unlike Germany, it does not promote a policy of family reunification, where migrants can bring relatives to live with them once they are settled. Greece does not want refugees and is struggling to keep itself afloat in the midst of a row with Brussels over a €240 billion ($348bn) debt. The previous Greek government made a secret deal with Syrian refugees in December, offering them residency papers and travel documents in return for information on people-smuggling gangs. About 200 people have been issued with the documents, and most have since left to claim asylum in other EU states. Germany accepted the highest number of asylum-seekers across the EU last year, and its politicians have reacted to the allegations with fury. Government spokesman Stephan Mayer said: “I am deeply astonished. The new Greek government must reveal everything quickly and completely. Certainly, if the former Greek government did not act in accordance to EU law, this must be punished and prosecuted by the European Commission.” Last month, the Greek people voted their government out in favour of a radical leftist party which has pledged to reverse years of crippling austerity measures. About 840 Syrians took part in a 24-day sit-in protest in Athens demanding the right to travel to other European countries. They were initially told they would have to claim asylum in Greece. Later, the government quietly reversed its position and told them they would receive the documents that recognised them as legitimate asylum-seekers in Greece. They received two sets of papers: a Greek residency pass and Greek travel documents. Under EU law, asylum-seekers must remain in the first country they arrive in and can be deported back to that country if they travel to other member states. However, countries that are popular with migrants, such as Germany, Denmark and Sweden, cannot send the newcomers back to Greece ­because deportations to the cash-strapped country have been suspended since 2011 to help it cope with its own problems. With official Greek residency papers, Syrians can book a flight to Germany, rip up their papers during the flight and claim asylum once they land in Germany. Abu Obei, one of the organisers of the Syrian demonstration, said: “When we started protesting in late November, the government (told us) that our only option was to claim asylum in Greece. But after 24 days a member of the government came to us and said we could work out a deal.” Greek Interior Minister Yannis Panousis said he was unaware of any such deal, but pledged to ­investigate the claims. Last month Germany extended its suspension on sending asylum-seekers back to Greece by another year. It has said Syrians are almost guaranteed asylum if they arrive in Germany, and since 2011 has received 71,000 applications for refugee status from Syria. In October 2013, Sweden became the first EU country to offer permanent residence to Syrian asylum-seekers. Denmark, Norway and The Netherlands are also popular target destinations, but none offers a way for refugees to apply for asylum from outside the country. That means that, without loopholes such as the Greek ­papers, the only way for the ­migrants to get there is via the smuggling networks that begin in North Africa and Turkey and use Greece and Italy as the back doors to northern Europe. “Refugees come to Greece as a transit point,” said Ahmed, a Syrian who reached Greece last year after crossing illegally from Turkey. “They want to travel on from here, so the thing everyone wants to avoid is having their fingerprints taken. If that happens, they can be deported back to Greece.”