Canada’s legacy of refugee aid at risk of fading 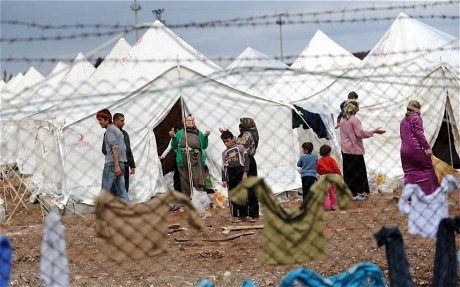 We were surprised to learn that 60% of the new Syrian refugees will have to be supported, not by the government, but entirely by private Canadian sponsors, such as church groups. Dahlia (her name has been changed to protect her family) is an Arabic teacher who immigrated to Canada with her husband more than 10 years ago. Her parents and many siblings with their families — Palestinians living for decades in exile in Syria — stayed behind in a suburb of Syria’s capital, Damascus. As that city became a war zone, Dahlia looked for a way to get her family to safety. Most of Dahlia’s family escaped into refugee camps in neighbouring Lebanon. There, they applied for refugee status in Canada. Dahlia sought in vain for a group to sponsor her family under the Canadian private sponsorship of refugees program. This program allows groups like churches or community service organizations to sponsor refugees to Canada. But there is no publicly available directory to help people like Dahlia find accredited organizations. The program does allow five or more Canadian citizens to come together and start their own group. So Dahlia found sympathetic people in her community of Hamilton willing to join her in becoming sponsors. Even with a sponsor, it took Dahlia’s 13 family members 18 months to get through the process of interviews and medical tests before they were allowed to come to Canada. Canadian sponsors take responsibility for all the refugee’s expenses for up to a year. The Canadian Council for Refugees told us $25,000 is a reasonable estimate to support a family. But since the government slashed health-care coverage for refugees in 2012, the bill can skyrocket if a refugee needs medical care. Dahlia has covered costs through donations of money and goods like furniture and clothing, from her community and local churches and mosques. When her family’s first apartment was infested with bedbugs, she had to replace all their furniture. Other Canadian sponsors who do not speak their refugee’s language would have to hire an interpreter to help. Her family is slowly settling in, but Dahlia frets about her two brothers who still haven’t made it here. One is stuck in Syria. The other is in Lebanon desperately finishing his refugee application, fearing police there could deport him back to Syria at any moment. Janet Dench, executive director of the Canadian Council for Refugees, told us her organization is concerned the Canadian government is increasingly downloading the responsibility and cost of helping refugees onto private Canadian sponsors. This, Dench says, will deter more Canadians from becoming sponsors.