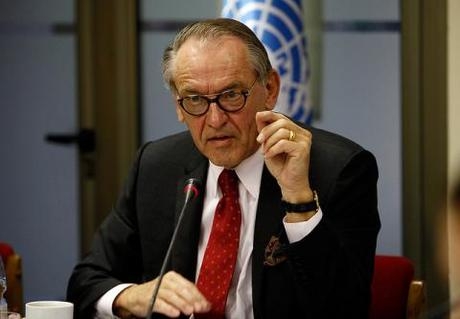 Deputy Secretary General of the United Nations Jan Eliasson is scheduled to arrive in Lebanon on Sunday on a three-day visit aimed at discussing the case of Syrian refugees, reported the daily An Nahar on Saturday. Eliasson will arrive on Sunday for talks with Speaker Nabih Berri, Prime Minister Tammam Salam, Maronite Patriarch Beshara al-Rahi, and a number of high-ranking officials. On Monday, he will participate in the launch of the Lebanon Crisis Response Plan for 2015–2016, which seeks to address the impact of the refugee presence in the country. He is also scheduled to visit a public school in Beirut to meet Lebanese and Syrian students. Eliasson will also meet with U.N. officials in Lebanon before concluding his visit on Tuesday. Lebanon has been struggling to support the burden of around 1.5. million Syrian refugees that have been pouring into the country since the eruption of the Syrian conflict. The government recently introduced restrictions on refugees in an attempt to limit their numbers. Lebanon has all but shut its frontiers to new refugees, allowing only humanitarian exceptions across, and the state is beyond its absorption capacities and urgently needs other countries to share its burden.