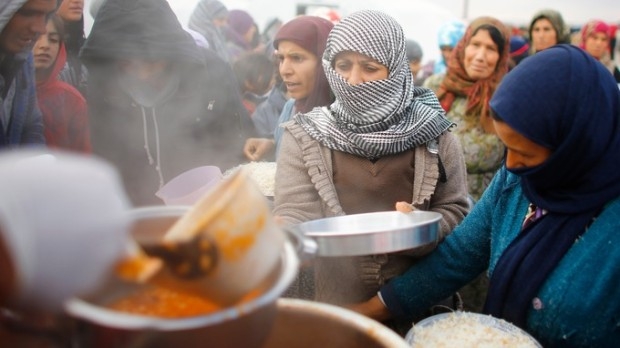 On Friday, the UN food agency said it has been obliged cut aid from nine Syrian refugee camps in Turkey “due to a lack of funds.” The World Food Program appealed to the donors to back the agency in order to continue supporting thousands of Syrian refugee families in Turkey. Spokeswoman of the WFP, Elisabeth Byrs, told reporters in Geneva: “Unfortunately, in February, we were forced to ask the Turkish government to take over assistance in nine camps where we could not continue providing aid because we lack funds.” According to Byrs, the WFP was facing “a $71-million shortfall for its aid program in Turkey this year”. “Getting more funding is really essential for the agency to continue its support to the Syrian refugees,” she added. “The U.N. agency needs $9 million each month to provide hundreds of thousands of Syrian refugees in the country with food aid,” Byrs revealed. The United Nations’ World Food Program used to provide about 220,000 Syrian refugees with electronic vouchers in the form of debit cards credited with money, allowing them to purchase the food and supplies they need in stores. However, the agency was obliged to cut the number of recipients to just 154,000 last month, Byrs explained.