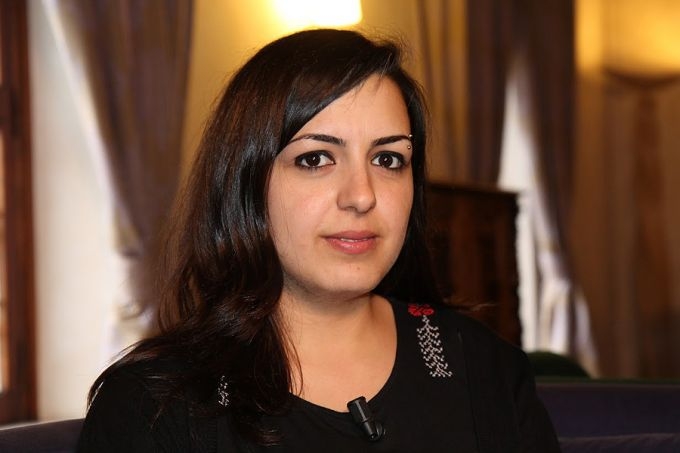 The destruction of Syria’s ongoing war has unearthed an unexpected jewel in the refugee camps of Lebanon: the chance for women to gain an education and the tools for rebuilding their homeland. “We’re empowering women,” Syrian refugee Reem Alhaswan told CNA March 8, so that when they return to their home country, “they can build their society in a better way.” The war and subsequent refugee crisis can be seen as an opportunity for women living in the camps to use “this very bad situation” in order to gain experience and develop their skills, she said. Alhaswan, 27, is one of more than a million Syrian refugees currently residing in Lebanon, according to the United Nations refugee agency, UNHCR. She is the founder and project manager of Basmeh & Zeitooneh – an initiative that helps women refugees develop practical skills so they can help to support themselves financially. In addition to selling hand-embroidered items, the women are learning to read and are being educated on issues such as domestic violence and human rights. Beginning in 2013 as a small woman’s workshop in the Shatila refugee camp outside Beirut, the project now helps more than 150 Syrian and Palestinian women. Forced to flee Syria in 2012 and live as a refugee in Lebanon, Alhaswan’s story gained international attention this Sunday at the Vatican’s Voices of Faith (VoF) women’s conference, where she received the Women Sowers of Development award for her work. Gathering women from around the world, this year’s VoF brought together women from various fields – including human rights activists, policy makers and academics – to give witness to their work in areas of poverty and the defense of human dignity and equality. First held in 2014, the VoF conference was established in response to Pope Francis’ call to “broaden the space within the Church for a more incisive feminine presence.” Dressed in a simple black frock embroidered by some of the women helped by her initiative, Alhaswan told CNA ahead of the event how those taking part in the program are being empowered with new skills learned through her workshop. The Women Sowers of Development award, which Alhaswan received on behalf of her fellow refugees, was launched last year by VoF and Caritas Internationalis. The 10,000 euro prize was also awarded to Caritas Nicaragua for its work in helping rural women learn how to grow and sell their own food. Ahead of the conference Chantal Götz, executive director of Fidel Götz Foundation which sponsors VoF, told CNA the annual event is an opportunity to celebrate the “unsung heroines” of the world. “The Catholic Church would be unparalleled in its contribution to humanity” if the world was made aware of the “wealth of knowledge, wisdom and skills” of the women working behind the scenes for the betterment of society, she said. Women have grown accustomed “to working away quietly, expecting nothing in return, shunning the limelight, delighting in the pleasure of doing what they feel they ought to be doing,” Götz observed. Martina Liebsch, who is responsible for policy and advocacy at Caritas Internationali, told CNA that the aim of the award was to specifically and concretely showcase the work women do, while giving them “opportunities to develop their talents and to be there at the service of their families and communities.” Through this award, the organizers wanted to demonstrate what women are capable of if given the “education, technical knowledge and resources,” she said.