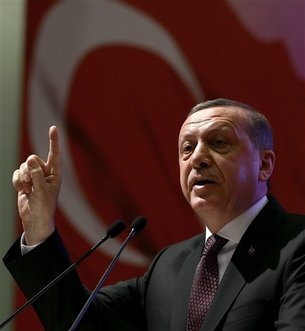 Turkey’s President Recep Tayyip Erdogan criticized the West Saturday for taking in so few Syrian refugees, while pledging to continue his country’s open-door policy for people fleeing the four-year-old conflict. “Do you how many displaced Syrians have been received by European countries? 200,000. We have welcomed two million. What a difference!” the Turkish leader said in Gaziantep, which is near the Syrian border and home to several refugee camps. “Western countries, who claim they are much richer than us, leave refugees to die at sea,” he added. Hundreds of migrants, many fleeing the strife in Syria, have perished in recent months in the Mediterranean trying to reach Europe, prompting rights groups to urge the European Union to do more to save lives. “We will never abandon our brothers… We will never close our borders (to Syrians) , we cannot do that,” he said. The Turkish government claims it has spent $5.5 billion (five billion euros) to help the Syrians it has welcomed since the civil war began in 2011. More than an 220,000 people have been killed in the fighting. However, Turkey’s disaster management agency AFAD says that only 265,000 displaced Syrians are housed in the 25 camps on Turkish territory. The rest of the refugees are living in precarious conditions in cities around Turkey, where they have become a growing source of tension with locals.