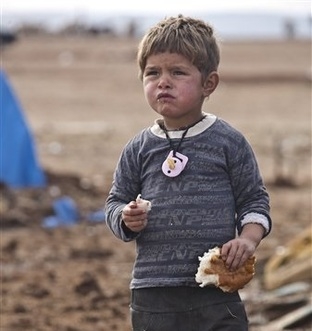 The European Union on Tuesday announced 10 million euros ($12.3 million) in new humanitarian aid for Syrian civilians in Turkey and Syria. “Today, we are stepping up our assistance to the people of Syria and to the Turkish communities hosting Syrian refugees,” EU foreign policy chief Federica Mogherini said in a statement. “Europe stands firmly with Turkey and is determined to play its role to the full to bring a lasting political solution to this regional crisis and humanitarian strategy.” Mogherini, who took office in November, visited refugee camps at the border on Tuesday a day after meeting with Turkey’s leaders in Ankara. Turkey has taken in 1.7 million Syrian refugees since the Syrian conflict began in 2011 but only a small portion of them are living in refugee camps — which are now at full capacity — and the rest are fending for themselves. The latest aid is part of a 70 million-euro package extended by Brussels to Turkey, an EU official told Agence France-Presse. The 10 million euros are specifically for humanitarian emergency work while the rest is for longer-term projects including in education, she added. Since the beginning of the Syrian crisis, the European Union has contributed 187.5 million euros to support refugees in Turkey fleeing the bloody war. The bulk of the resources allocated early on in the crisis has targeted refugees in camps, but in 2014 the focus has primarily been to support refugees living outside camps, in particular new arrivals.