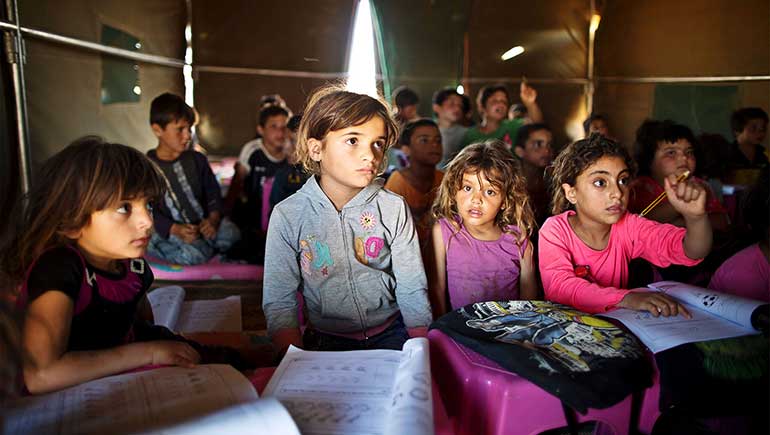 Fatima’s eyes are sad and dull as if she were tormented by a constant terrible thought. Her four sisters, her mother and her grandmother sit beside her. Three generations of women look at me. In their eyes I can read a mixture of curiosity and astonishment. They all wear a blue veil and a large dress and they sit close to each other in front of a big fan. No furniture in their house, a typical refugee’s house. Fatima and her sisters have been living in Antakya, Turkey, since the beginning of 2013. They left their village north of Aleppo where they were studying. Fatima was attending the last year of high school and her younger sisters were attending primary school and middle school. Their mother and their grandmother used to cultivate the land and went regularly to Aleppo’s souk to sell their products. When the first demonstrations broke out in the southern town of Daraa, they didn’t worry since they weren’t involved in politics: they were just a family of students and farmers. “At the end of 2012, the situation worsened. There were intense clashes and continuous bombing. We were extremely scared. My two brothers and my father joined the Free Syrian Army, they wanted to defend our people, our friends. My sisters and I were stuck at home: since all the men of the family were busy, they couldn’t take us out or bring us to school.” Fatima tells her story, her eyes are sad, hopeless. “Eventually it became impossible to live in our village under incessant bombing and lack of water, electricity and gas. We were even afraid of opening the windows of our house.

One day our neighbours’ house was bombed. We left. We didn’t have any problems to cross the Turkish border illegally”.

Now Fatima and her family live in an old and dilapidated building. Her father and her brothers laugh and smoke in the terrace while Fatima and her sisters are forced to stay inside the house, sweating, with a curtain that covers the window and separates them from the external world. Their father and one of their two brothers are still with the Free Syrian Army and every week-end they visit their family in Turkey. The other brother found a job in Antakya instead.

“In Syria we had our fields and our beautiful house. We lost everything and now it’s very difficult for us to start again from scratch. My father says that Antakya is very dangerous and that it’s better for us to stay at home. I have been here since the beginning of 2013 and I have never been in the city centre. We don’t go out unless there is a man who can come with us. My father and my brothers are always in the battlefield in Syria, so me and my sisters are forced to stay at home”, Fatima continues.

Only their mother and their grandmother go to the market while their daughters are waiting at home, sitting on the couch, watching television. However, Fatima fills up her empty days with her true passion: she draws.

“Since the time we became refugees, without a place to stay, I began to feel something coming up from my soul and I started drawing in order to express my feelings,” Fatima says. Mothers and children running away from war, a horse running towards freedom, two hands setting free a white dove, a victorious fighter raising his rifle.

Watching her drawings, you can almost grasp Fatima’s feelings and emotions. I understand the meaning of her sad eyes, deprived of vital energy; the sense of oppression and humiliation that she is feeling; her desire of freedom, for Syria, for her sisters, for herself. Perhaps Fatima would like to be free of moving around without asking permission to her father; perhaps she would like to discover the new city where she is living, go to school and finish her studies.

“Freedom. This is what we want.” Fatima smiles. And, for a moment, her eyes fills up with joy and hope.