Female Syrian refugees would rather go to Syria than refugee camps 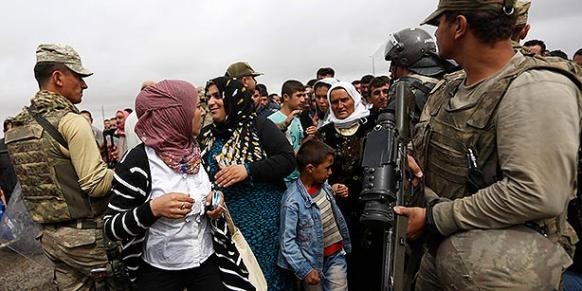 Professor Zeynep Kıvılcım said Syrian refugee women would rather return to Syria than go to a refugee camp, during her presentation on Monday at a “Law and Gender” panel discussion at Kadır Has University. Kıvılcım’s analysis is based on her extensive interviews, from April to December 2014, with Syrian female and LGBT refugees between the ages of 16 and 55. Kıvılcım said the interview project paid special attention to having women conduct the interviews as well as having female translators so the environment would be as comfortable as possible and make it more likely that the refugees would be truthful. The project also included interviews with the İstanbul Police Department’s Foreigners Branch and muhtars (literally head man or elder), who are responsible for keeping official records within community areas. The scholar stated that İstanbul has around 330,000 refugees, making it the city most densely populated with Syrian refugees in Turkey. She also said about half of these refugees have not registered with the state, mostly out of fear that they will be taken to a camp. Furthermore, according to the statistics presented by Kılıcım on Monday, 15 percent of female refugees are pregnant, which is resulting in a ‘lost generation’ of Syrians born in Turkey. “I married a Turk with an ‘imam wedding’ [imam nikahı, meaning married in the eyes of God]. We went to Erzincan. We separated when I was five-and-a-half months pregnant,” said a 31-year-old female Syrian refugee interviewed by a project researcher. “First, I went to Syria, but it was too dangerous so I returned to İstanbul. I live alone with twins who are 42 days old. My babies are still not registered. I have filed a custody and child support lawsuit.” Living standards for Syrians, especially women, is poor considering it has been four years since the Syrian civil war broke out and refugees in Turkey are not given work permits. In her research presentation, Kıvılcım also stated that 97 percent of Syrian women live hand-to-mouth and that others are left in the desperate position of having to prostitute themselves to earn money. “Within the neighborhood, there are several property owners who rent out stores to Syrians that don’t even have toilets and showers. They will split up a store into four or five sections and rent each out for TL 40 a month. People are left having to go to the bathroom outside on the street,” said the muhtar of the Küçükpazar Yavuz Sinan neighborhood in the Eminönü district of İstanbul.