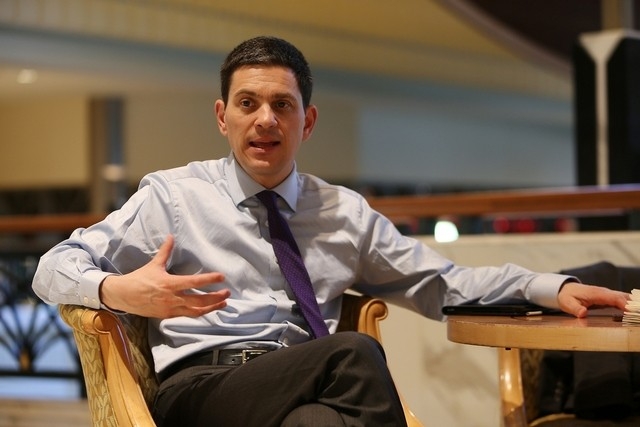 David Miliband, who is now chief executive of the International Rescue Committee, a charity committed to helping the most vulnerable, said the West had so far been poor at setting a good example on this front so there is a chance for Gulf countries to show their humanitarian prowess. “The world beyond Syria needs to take its fair share of people leaving the country,” he said in an interview with The National. “Western countries have not been good at this so far. “One of the things the Gulf could do is make a point here. The UN has said 130,000 Syrians need to be resettled every year outside of the country. “That needs a fair allocation. At the moment that isn’t happening and, symbolically, that is damaging. “It is very important that there remains an openness in the Gulf to help people who are trying to escape from their suffering. It can’t just be Lebanon, Turkey and Jordan that are bearing the brunt of refugees.” Mr Miliband, 49, who served in the British government under prime ministers Tony Blair and then Gordon Brown, said Gulf leaders must act now to stop turmoil spreading further throughout the region. “The world is convulsed by a record number of people who have become displaced from their homes,” he said. “The Middle East is the epicentre of a tumultuous period in global politics and for a humanitarian cause like ours. We are here in the UAE to talk to people about what we can do about it. This is a man-made disaster.” Mr Miliband was speaking ahead of a meeting in the UAE to encourage further financial support to help the relief effort for displaced Syrians. His charity is developing a partnership with the UAE’s Ministry of International Cooperation and Development and they have started work on humanitarian projects in Iraq and Jordan. The IRC was founded at the suggestion of Albert Einstein in 1933 and is now a global humanitarian charity working in 35 countries, including Syria and its neighbours. Mr Miliband said the organisation has helped more than 17 million people to date but the demand is greater than ever, and the majority of those in need are Muslims. The UN has said 250,000 people in besieged parts of Syria are completely cut off from aid, and six million are in need of humanitarian help. The IRC runs cross-border health and education centres, entering the country via Turkey, Iraq and Jordan. “The greatest tragedy is there has been an implosion in Syria and there is no prospect of an end. People from Damascus, Aleppo and the north-east have asked: where is the world when we need them? It is a very good question,” said Mr Miliband. “I have seen the suffering. The blood and suffering has already been huge, and that is a massive concern for the Gulf. “The UAE has the chance to be a leader in the humanitarian field in this area,” he said. “It has an opportunity to work with non-governmental organisations who can reach people that are cut off from the official channels. “The opportunity for the UAE, the state and the public, is to now make a difference. The needs are much greater than the traditional international system can meet. “Different parts of the Gulf have made their financial contributions but, overall, it has to rise, and also [increase] from the West.” Mr Miliband said it is important that Gulf countries play a central role in the politics of Syria, as it is in their own interest. “No one here should believe there would be no consequences in the Gulf as a result of the Syrian conflict,” he said. “Political instability in Syria and its neighbours will always have a ripple effect – that is worrying. “There is a real professionalism in the way the UAE goes about its business. It can make a difference. It wants to be a serious player in global politics and that is a good thing.”