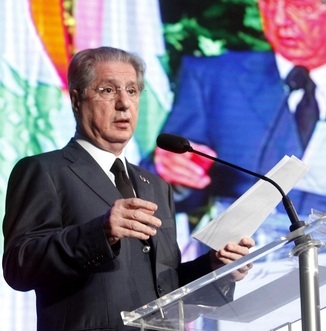 Kataeb Party leader Amin Gemayel on Friday called for urgent measures to control the presence of Syrian refugees in Lebanon and count their numbers, suggesting the recruitment of new municipal police members who would contribute to protecting towns and villages. “We are largely counting on the role of local authorities and municipalities amid the current circumstances in the country and in the face of all the threats that Lebanon is facing,” said Gemayel at a Kataeb-organized seminar on the role of municipalities. “As long as the central government is preoccupied with the known political complications, the local authorities must perform their duties and innovate solutions,” Gemayel urged. He noted that the biggest challenge is “organizing the presence of refugees in a manner that would preserve the country’s security and the interests of citizens,” warning that “the security of our citizens will face dire challenges if we neglect this issue.” Gemayel cautioned against what he called “repeating the disastrous national experience that we suffered with the temporary Palestinian presence in Lebanon.” “We were forced to resist the Palestinian violations on our soil,” he noted. Accordingly, Gemayel called for taking all the necessary measures to “fend off all threats and violations in some regions, before it becomes too late.” He suggested devising a “scientific statistical mechanism and municipal records” for Syrian refugees and to “categorize their labor sectors” in a bid to “differentiate between laborers and refugees.” Gemayel also called for stricter control over the work of international organizations and NGOs dealing with the refugee problem, accusing them of “exceeding their authority and even national sovereignty.” “Refugee gatherings must be specified and rents must be put under control and we must realize the need to protect the Lebanese workforce in all sectors,” Gemayel added. He said “security is the responsibility of the municipal police, who must coordinate with the security agencies.” “This cooperation has proved its efficiency and it is necessary to start recruiting new members for the municipal police so that they protect citizens while respecting state authority. This would allow the army and security forces to focus on their missions,” Gemayel explained. “A joint municipal crisis cell must be formed in order to devise a complete plan to address this challenge without any delay,” he urged. There are already more than 1.5 million Syrian refugees in Lebanon, which has a population of just four million people. Many are already living in informal encampments on farmland or empty fields in parts of the country. The refugee influx has put massive pressure on the country’s limited resources and contributed to rising tensions in a nation with a delicate sectarian balance and bitter memories from a 15-year civil war. The conflict in Syria has regularly spilled over into Lebanon, with the border region often particularly volatile. Turning to the political crisis, Gemayel stressed that “the presidential vote remains a priority.” “I don’t understand how some leaders are misinterpreting the Constitution,” he lamented. “Constitutions should not be an excuse to impede the election of a president as is the case now,” Gemayel underlined, urging cooperation to “save the republic and rescue Lebanon.” Lebanon has been without a head of state since May when President Michel Suleiman’s six-year term ended with MPs unable to find a successor over their differences on a compromise candidate. The vacuum at Baabda Palace has been coupled with a rise in attacks on the army following deadly gunbattles in the northeastern border town of Arsal in August.