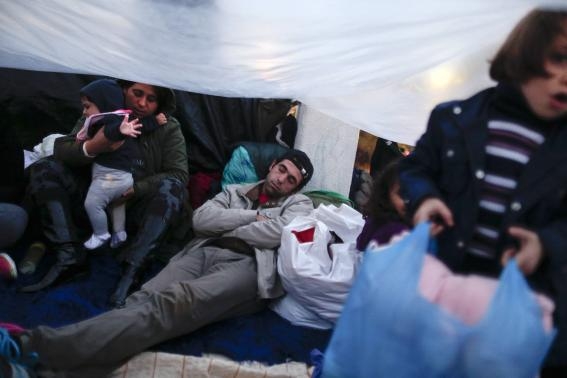 Greece’s government said on Tuesday it could do little to help about 300 Syrian refugees camped outside parliament for weeks because none of them had applied for asylum or shelter. The Syrian refugees, including women and children, have defied the rain and cold to sleep on the pavement opposite parliament since Nov. 19, demanding the right of passage to other European countries to be reunited with family members. They symbolically taped their mouths shut more than a week ago as they launched a hunger strike and unfurled banners reading “The government must find a solution for Syrian refugees now” and “We escaped death”. The interior ministry has tried to convince them to apply for asylum to help them, but so far not a single protester has agreed to do so. Syrian refugees usually avoid applying for asylum in Greece because the process is slow with very low acceptance rates and the country has few jobs because of its prolonged economic crisis. European rules prevent them from seeking asylum in another European country once they have applied here. Most want to travel to northern Europe but cannot do so legally, leaving many to complain that they are trapped in a country without any prospects but with increased hostility toward immigrants. “Most of them want Greece to give them documents to travel to other European countries. There is no such document in Greece or any other EU country,” the interior ministry said. About 46,500 Syrians have arrived in the crisis-hit nation since 2011, more than half of them this year, the ministry said. Last week, the navy rescued a cargo ship packed with 600 Syrians off the island of Crete. Some refugees eventually slip across Greece’s borders to make their way north, but Athens has no figures on this because they are not officially registered. The crisis-hit country, a popular entry point into Europe for thousands of undocumented migrants from Asia and Africa, warned in September that it was slipping into a “danger zone” without adequate funds or resources to handle a fast-growing wave of refugees from war-torn nations like Syria. Greece, which holds the EU’s immigration portfolio, wants to reform the Dublin Treaty, which makes asylum seekers the responsibility of the first EU country they enter.