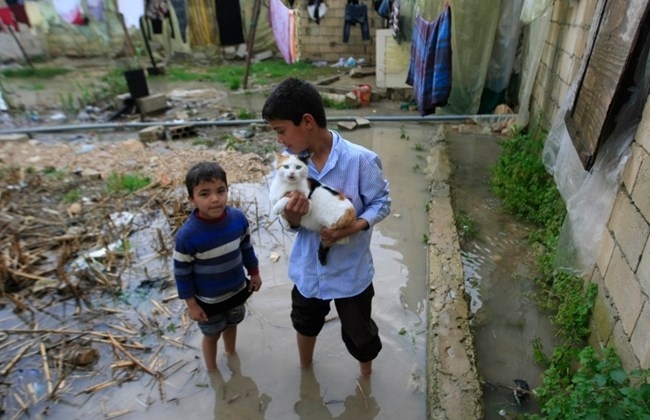 A deluge of rainwater flooded the streets of Zahrani Wednesday, forcing Syrian refugees to abandon their swamped tents in the southern village. Sleiman Ammar, a refugee child, told The Daily Star that he “I heard her [his cat] meowing so rushed to save her,” while clutching his cat to his chest. The rainwater flooded the streets at the intersection between Zahrani and Nabatieh, stalling traffic as the sewage system struggled to cope with the extraordinary amounts of water. Mohammad Ammar, father of Sleiman, who hails originally from Hama in Syria, described how the water poured into their tent. “The water entered and soaked the all the mattresses, bed sheets and couches,” he said, as his children used small pots to clear floodwater from inside their temporary home. Rain fell heavily all morning in many areas of south Lebanon, flooding fields and increasing the height of the Zahrani River.