Hospitals in Turkey built to treat the wounded Syrian refugees 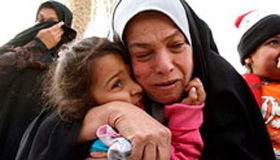 As the Syrian conflict continues in full force – thousands continue to seek refuge and medical care in neighboring Turkey, many of them arriving injured. But for those who need more than a quick fix – life becomes even more difficult. The United Nations estimates that since the Syrian civil war began three and half years ago, over 190 thousand people have been killed. Millions have fled into neighboring countries and thousands have been injured before they could seek safety. For the casualties of the Syrian war, Turkey does provide immediate medical treatment, but for those who need long-term rehabilitation there are limited options – this facility is one of the few. Bunian is a rehabilitation center located in Sanliurfa Turkey and funded by an organization from Kuwait. With only 2 doctors, 1 manager and a group of volunteers – they treat approximately 30 patients at a time. Hani Kadro is a pharmacist. He arrived in Turkey in 2012 desperately trying to save his wounded brother. But despite all efforts, Hani lost his brother. It was then that he decided to launch this center. “You can see all kinds of traces of war here, from every weapon that is being used: shrapnel, tanks, missiles, mortars etc. Some lose their limbs, their nerves, their eyes, most of them arrive here heavily injured. If we hadn’t opened this place, you would’ve probably seen them wondering on the streets,” Kadro said. The center accepts all injured Syrians, no questions asked, without checking their background or affiliations. It receives people from all across Syria, with different stories to tell. Their common ground – they have all been hit by war. This man currently is unable to walk. He was carried by his friends for 4 days before they reached a decent hospital for initial treatment. A journalist – he was injured in the line of duty. he shows us the last video he shot as he recalls the night he was shot. “The revolution began peacefully. We had vowed not to take up arms. But when fighting began with the Assad government – people began responding with fire and knives. On July 22nd in 2012 I was shot by a sniper while I was trying to report what was happening,” said an injured Syrian Journalist in Turkey. It is unclear whether this Syrian man will ever walk again. But for now – he is receiving physical rehabilitation at Bunian, feeling safe and is grateful for it. Without this center – many like him would have nowhere else to go