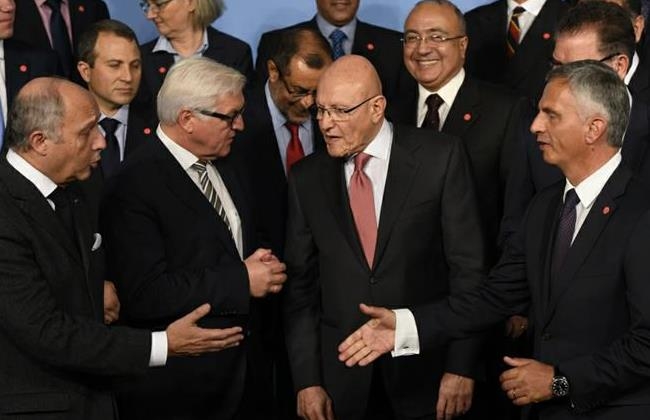 An international conference on the Syrian refugee crisis vowed Tuesday to extend long-term financial aid to countries struggling with what the UN calls the world’s “most dramatic humanitarian crisis,” but did not commit to an overall figure. Around 40 countries and international bodies adopted a declaration saying donors would “mobilize for years to come” increased development support to help nations like Lebanon and Jordan shoulder the impact of millions of Syrian refugees. It did not include any concrete figures. Germany said this had not been the conference’s prime aim. Berlin said it was budgeting 500 million euros ($637 million) for 2015-2017 to help Syrian refugees, and the U.S. announced $10 million in additional humanitarian assistance for host communities in the region. Addressing the conference, Prime Minister Tammam Salam urged the U.N. to increase funding to boost Lebanon’s economy, hit hard by the Syria war, and speed the resettlement of Syrian refugees. In order to reach an effective solution … we must focus on finding ways to encourage donors to increase their contributions to funding development projects aimed at the rehabilitation of public services and the expansion of educational and health institutions as well as promote stability, Salam said. It is also vital that this conference will look at the various options for the resettlement of Syrian refugees in other countries, he added. Salam said the Syrian war not only has affected the Syrians who were forced to flee their homes, but also the Lebanese people who host the refugees. Salam said slowness in economic activity and the significant decline in production over the past two years have increased unemployment and raised the percentage of the Lebanese population who live below poverty line to more than 5 % according to the World Bank. He said the dramatic rise of government spending linked to the population increase, combined with the decline in tax revenues caused by the economic slowdown, had made an already fragile situation worse and raised the budget deficit by 10 % of gross national product. Lebanon hosts around 1.2 million registered Syrian refugees, but unofficial figures are much higher. Their presence is exerting enormous pressure on the country’s ailing infrastructure. He noted that public schools were forced to receive, in a very short time, additional students equal to 40 % of the number of Lebanese students. U.N. High Commissioner for Refugees Antonio Guterres told the conference that the impact of 3 million Syrians having fled the long and bloody conflict was “enormous” on its neighbors.“Economics, public services, the social fabric of communities and the welfare of families are all affected, not to mention the security impact of the Syrian conflict in the whole region,” Guterres said. Salam stressed that poor communities had been unprepared to deal with the influx of Syrian refugees, saying the strain “poses a number of challenges and threats that constitute a fertile ground for extremism and violence.” He said Lebanon had paid dearly for its openness policy, where 85 % of the Syrian refugees live in ordinary houses within Lebanese towns and villages, despite the presence of temporary camps scattered across Lebanon. Many of them have even set up small businesses and were operating without licenses, engaging in unfair competition with Lebanese traders, he said. Salam also urged the UNHCR “to explore ways to enable the Syrian refugees to exercise their right to return to their homes. This … may prove to be the most appropriate and effective solution. “ Before Tuesday’s ministerial conference, Salam attended the meeting of the International Support Group for Lebanon, where participants emphasized the “crucial importance of national unity for stability and security” in Lebanon and “expressed support for the efforts of Salam and his government in confronting the many challenges facing the country.” The attendees, who included Salam and the German foreign minister, voiced their concern over a prolonged vacancy in Lebanon’s presidential post and the impact the void has on state institutions, according to a statement issued by participants after the meeting. They also affirmed “it is vital that Lebanon’s political leaders act to resolve the issue in the interest of all in Lebanon without further delay.