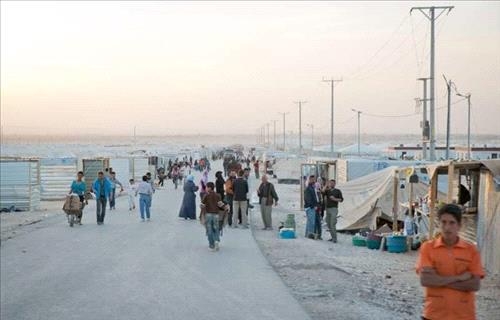 As the winter cold sets in, several Jordanian organisations are working to provide assistance to Syrian refugees in the kingdom as international aid agencies struggle from a lack of funds. Non-profit organisation Al-Sabereen for Sustainable Development launched a campaign called “Dafa” to provide heating and food to impoverished Syrian families taking refuge in Jordan, especially those who have sick and wounded members and those without a breadwinner. Al-Sabereen conducted a similar campaign last winter, collecting donations from local communities to purchase heaters, rugs, blankets and food packages to distribute to refugees throughout the kingdom. A project launched in November by the General Union of Voluntary Societies in collaboration with the Latter Day Saints charity also is helping Syrian refugees face the chill of winter. Through this project, several groups are handing out winter clothes and hygiene products to Syrian refugee families and impoverished Jordanians in al-Mafraq and Irbid, where the majority of Syrian refugees are based, according to organisation president Falah al-Qudah. The union called on all Jordanians to support this project to help families to face the winter cold. Mohammed al-Zubi from Deraa, a Syrian refugee who is currently living in a two-bedroom house with his five children, said he relies on assistance from charities to pay his rent and feed his children. “I cannot support my family because Syrian refugees in Jordan are not allowed to officially work, not to mention the fact that I have a foot injury which prevents me from holding a job,” he told Al-Shorfa. Al-Zubi, who fled to Jordan two years ago, said he needs every kind of support and assistance in order to protect his family from the winter cold. Islamic sharia professor in Amman Sheikh Mohammed Abdul Rahman urged well-off Jordanians to aid refugees, “who are suffering from difficult conditions in the kingdom”. “Helping this segment is a religious, moral and social duty and at a time like this, people must come together to help others who are less fortunate,” he told Al-Shorfa. Most refugee families are poor and many are homeless after leaving their homes, jobs and belongings behind, he added, and they need all kinds of support, particularly during the winter. According to official figures released by the Jordanian Ministry of Planning and International Co-operation, there are now more than 1.4 million Syrians in Jordan, 600,000 of whom are registered with the UN High Commissioner for Refugees. The kingdom continues to appeal for aid from the international community to help it bear the burden of Syrian refugees and enable it to continue providing them with services. Often, during Friday prayers, mosque preachers in Amman also call on people to give donations. They focus on the importance of helping Syrians buy what they need in the winter, and have set up donation boxes at the mosques for this purpose. “People donate all the time and several well-off people in the area donate rugs and heaters for Syrian refugees and needy Jordanians,” said Ibrahim Kanaan, a mosque preacher in Amman’s al-Hashemi al-Shamali.