Kayla Mueller a US aid worker dedicated to Syrian refugees 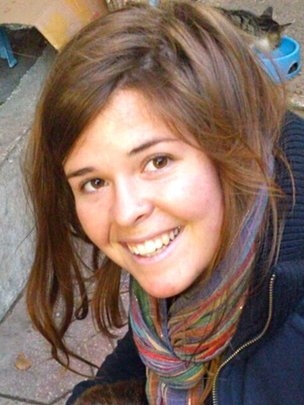 The portrait that has emerged of 26-year-old Kayla Mueller, the Islamic State hostage whose death has been confirmed by the US, is of a young woman devoted to helping others. Ms Mueller travelled to the Turkey-Syria border in 2012, to work for the Danish Refugee Council and Support to Life, according to her family. On 4 August, 2013 she was taken captive by IS in Aleppo, Syria, while leaving a hospital run by MSF During her aid work, Ms Mueller visited refugee camps where she played and painted with Syrian children. She found that she “can’t do enough” to help Syrian families, according to a report in her local Arizona newspaper, The Daily Courier. “When Syrians hear I’m an American, they ask, ‘Where is the world?’ All I can do is cry with them, because I don’t know,” she told the newspaper. Ms Mueller said she heard stories of children being hurt by unexploded bombs, women being forced into early marriages, and children being forced to fight for both sides. “Syrians are dying by the thousands, and they’re fighting just to talk about the rights we have,” Mueller told the newspaper. For as long as I live, I will not let this suffering be normal. (I will not let this be) something we just accept,” she said. Ms Mueller studied at Northern Arizona University, in Flagstaff, where she volunteered for three years with the Save Darfur Coalition. She wrote letters and placed calls to members of Congress, and took part in silent protests, according to a separate profile in the Daily Courier. A website set up in her memory said she enjoyed camping and hiking.