Kids welcome Syrian refugees with messages ‘from the heart’

Amid the flurry of paperwork facing Syrian refugees when they land in Canada, it will be the hand-made cards with cotton-ball snowmen that are bound to lift their weary souls.

“Welcome to Canada, I really hope you have a nice time,” says one of the folded construction-paper greetings bearing a sketch of a heart with two flags — Syria’s and Canada’s. “I’m glad you came — Math is fun! Soccer is fun! And tobogganing is fun!” says another of the simple messages being drawn by school children for Canada’s most celebrated newcomers.

Some of these welcome cards, students will deliver to Parliament Hill next week, even carry greetings in beginner’s Arabic, like those crafted by earnest Grade 4 artists at Toronto’s Regal Road Public School. 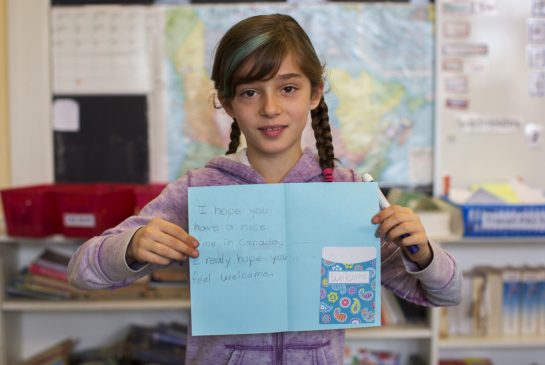 “Actually, their language goes from right to left,” 9-year-old Layla Khalidi tells classmate Riley Flood, who had carefully copied the Arabic script for “Hello, welcome to Canada” from the teacher’s laptop — but written it, as usual, from left to right.

“I’m going to put a message on the back of my card too, because they read from back to front,” said Layla, whose family is Lebanese.

This was one of five classes at Regal Road school to make refugee welcome cards Wednesday in workshops led by Toronto lawyer and mother of four Sara Hildebrand. Her grassroots group Millennium Kids encourages students to champion the United Nations’ eight “millennium development goals,” which range from wiping out poverty to ensuring public education for all and fighting climate change. 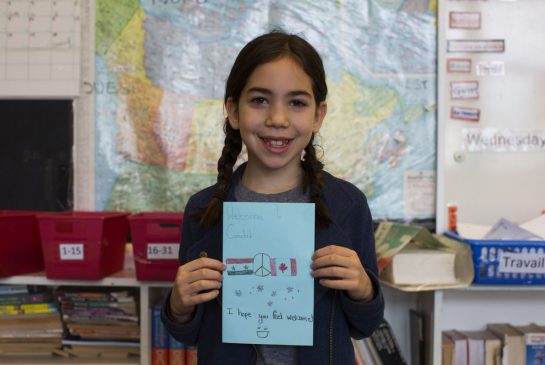 More than 20 Toronto schools have asked Hildebrand to lead card-making workshops, which she starts by talking about refugees and noting that of the world’s 20 million refugees, half are kids, and 2 million children in Syria can’t get an education because their schools have been bombed or taken over by soldiers. 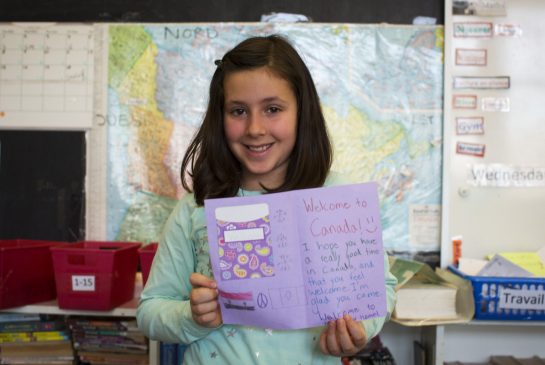 “I think making these cards has as great an effect on us as it will on them, because it gets kids thinking about what it’s like to be a newcomer from a place where there’s war going on, and also makes them take stock of how blessed we are in Canada,” said Hildebrand, who is taking a busful of students to Ottawa next Wednesday to give the welcome cards to, she hopes, Prime Minister Justin Trudeau or Immigration Minister John McCallum. Schools in Saskatchewan, Quebec and Prince Edward Island have joined the project and are mailing their cards to their MPs. 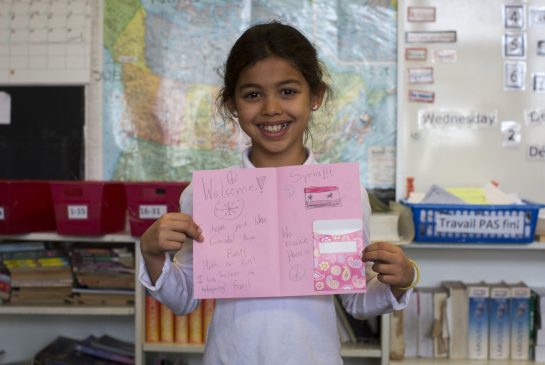 At Regal Road, young Méline Maldonado comes from a typically Canadian cultural mash-up; one grandmother is Syrian, a grandfather Lebanese and other relatives are Armenian and Spanish — all languages Méline can speak.

“I know Canada is different from Syria and so much colder, but maybe they’ll like the difference,” she mused. “I hope we get some of them at our school.” 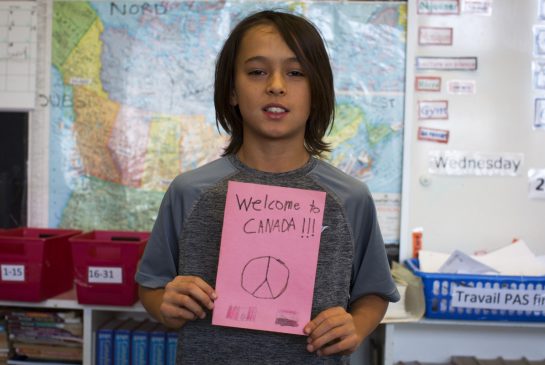 As they glue on cotton-ball snowmen and draw peace signs and dig out the red and green pencils they need for the Syrian flag, “they’re developing the seed of compassion when they’re young that can shine throughout their lives,” said teacher Jamie Roos. “I’d been trying to deal with the topic of refugees with students, and it was overwhelming, all the questions like, How will they get here? Where will they be housed? So much of that comes from the head,” said Roos.

“But this idea,” she said of the clusters of kids poring over their welcome cards, “comes from the heart.” 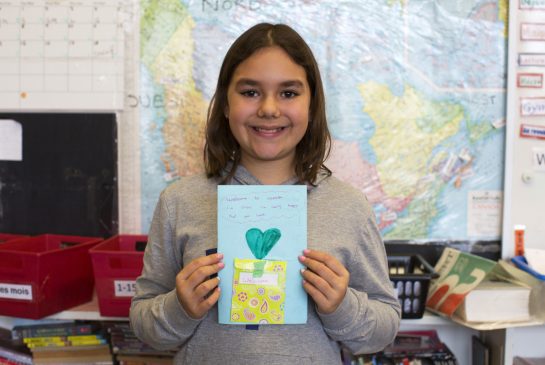