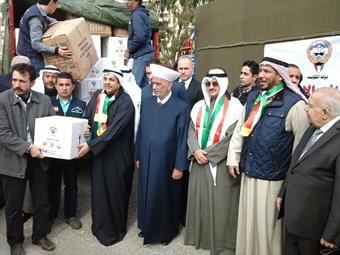 a statement to KUNA after distributing aid to Syrian refugees in the framework of the campaign of “Humanitarian Leader”, the minister said that there are many burdens on Lebanon to host a big number of Syrian refugees. He noted that his current visit to the country aims at being acquainted closely with the humanitarian situation of the Syrian refugees and urgent needs of Lebanon to alleviate their sufferings. The minister said that he will hold talks with Lebanon’s Mufti Sheikh Abdel-Latif Derian to formulate a mechanism aimed at following up and coordinating efforts exerted in the relief action. On his part, Chairman of the International Islamic Charitable Organization (IICO), UN Secretary General’s Envoy for Humanitarian Affairs and Amiri Diwan Advisor Dr. Abdullah Al-Matouq, said that the campaign comes in the framework of directions of His Highness the Amir Sheikh Sabah Al-Ahmad Al-Jaber Al-Sabah to be briefed on the needs of the Syrian refugees in Lebanon. “We had earlier visited Jordan and distributed relief aid to Syrian refugees there and today we are in Lebanon to hand out blankets and other relief materials to other Syrian refugees,” he said. Zakat House Director General Ibrahim Al-Saleh, meanwhile, said that there are a big number of Syrian refugees in Lebanon and consequently they are suffering from a big crisis. “We hope to solve this crisis and help all refugess return their home as soon as possible,” he said, urging philanthropists to help Syrian refugees in Lebanon, Jordan and Turkey. He pointed out that the refugees, mostly children, women and elderly, are living amid severe weather conditions. The Kuwaiti delegation includes Deputy Secretary General of Kuwait Awqaf Public Foundation Mohammed Al-Jalahma and Director of Media Department at the Awqaf Ministry Ahmad Al-Qarawi. The campaign distributed foodstuffs and blankets today to about 1,200 Syrian families in Beirut with the participation of Sheikh Derian and Kuwaiti Ambassador to Lebanon Abdelaal Al-Qenaei. According to recent statistics, the number of Syrian refugees in Lebanon exceeded one million. Kuwait is considered a major country that has offered aid to Syrian refugees in Lebanon since the outbreak of the crisis