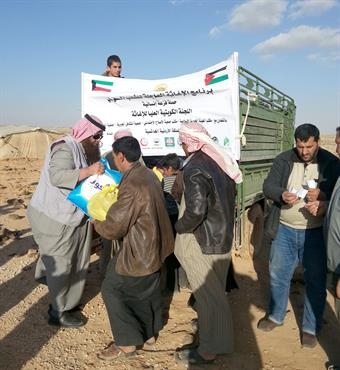 The State of Kuwait’s Higher Relief Committee wrapped up a relief campaign, aiding up to 1,440 Syrian families that have taken up refugee in Jordan. The head of the Kuwaiti humanitarian mission Dr. Walid Al-Enjeri said aid supplies including food were distributed to the Syrian families, adding that each family was given USD 140 in cash, according to Kuwait News Agency (KUNA). Some of the Syrians fleeing violence at home have taken up refuge in Qasr Al-Hallabat, a town located in Zarqa Governorate in north-western Jordan, and the capital Amman. The campaign targeted most impoverished Syrian families who have recently arrived in Jordan. The Kuwaiti relief committee comprises 11 government and grass-root authorities and associations. Since the flare-up of the Syrian conflict, the State of Kuwait has provided thousands of Syrians, whether refugees, relocated or homeless, with abundant relief supplies, KUNA reported.