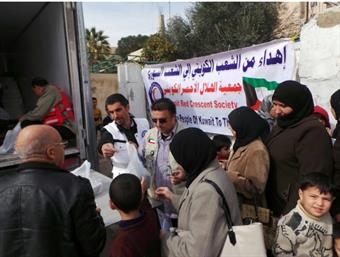 Volunteers of Kuwait Red Crescent Society (KRCS) distributed here on Sunday about 140 tons of humanitarian aid to Syrian refugees living in makeshift shelters across the country. In a statement to KUNA, Jassem Qamber, the KRCS delegation’s head, said that the four-day aid campaign has so far delivered aid to about 300 Syrian refugee families. The seven-truck aid campaign includes blankets, foodstuffs, heaters and wheelchairs, he said, underlining the significance of this support to meet the needs of refugee families and ensure some basic requirements, notably in light of cold weather conditions. He noted that the campaign, carried out by the volunteers in collaboration with the Kuwaiti embassy in Jordan and Jordan Red Crescent Society, comes within the directions of His Highness the Amir Sheikh Sabah Al-Ahmad Al-Jaber Al-Sabah to alleviate the sufferings of Syrian refugees. Kuwait was a leading country that paid more attention to humanitarian repercussions caused by the Syrian crisis and provided support for Syrians under the directives of His Highness the Amir and in cooperation with philanthropic institutions interested in this regard, he said. He went to say that the KRCS continues playing a humanitarian role in alleviating the sufferings of Syrian refugees.