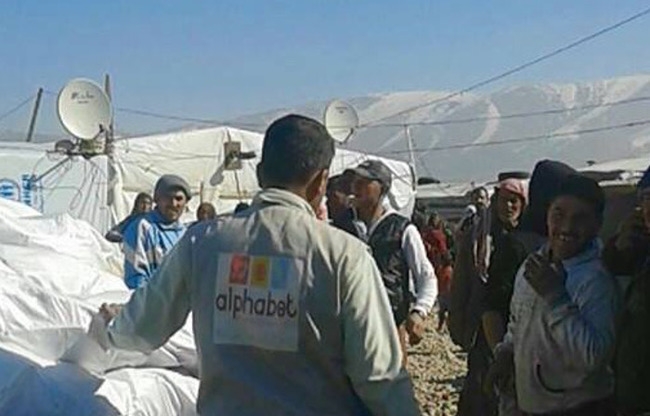 Lebanese civil society groups took action to launch campaigns and collect donations to aid thousands of Syrian refugees following the cold wave that hit the country and as news circulated about the death of seven Syrian children from the harsh winter weather, amid images of shivering Syrians at camps.One such campaign, “Khali Souftak Hamra” — a joint initiative by the organisation Lebanese for Refugees and environmental NGO “G” — managed to collect 22 truckloads of aid within one day. “This is the least we can do for our Syrian brethren in their time of need,” G president Nader al-Nakib told Al-Shorfa. “The images we saw on TV of how the refugees were struggling on the first day of the storm were deeply moving, so we reacted and launched the campaign, raising our voices so people would take part in it.” More than 3,000 people took part in the campaign, which was held January 8th-10th, he said. They donated sacks of winter clothes of various sizes in addition to winter shoes, woollen blankets and food, all of which went to shelters and refugee camps throughout Lebanon, he said. “We could not stand idly by while people were dying in the cold weather,”al-Nakib said. “The tragic situation of the refugees continues, as they live in deplorable conditions far from their homes,” he added. “Although our campaign was designed to be a one-off event, we decided to continue until the winter was over.” Alphabet, an NGO for alternative education established by Syrian activists in Lebanon, also launched a campaign: “$4 for Firewood”, a social media initiative to which Lebanese, Syrians in Lebanon and people from across the Arab world have donated between $4 and thousands of dollars via bank transfers. With these funds, Alphabet was able to buy firewood and food for refugees in the Bekaa as well as impoverished Lebanese families. “We started our NGO at the end of 2013 with the goal of providing alternative primary education for Syrian children who took refuge in Lebanon at six camps in the Bekaa,” Syrian activist and Alphabet director Ranim al-Sheikh Ibrahim told Al-Shorfa. “But after the storm, we found that camps and families had no fuel or heating, which prompted a friend of our organisation, the writer Shatha Sharafeddine, to launch a Facebook campaign with a group of girls to raise money for purchasing firewood,” Ibrahim said. The campaign, which was well-received in Lebanon and abroad, particularly among Syrians living in Arab countries, “snowballed”, she said, netting $33,000. To date, she said, the organisation has distributed some 50 tonnes of firewood to 12 tent clusters in the Bekaa, particularly Bar Elias. “We gave each family between two to three sacks of firewood according to the number of family members, with each sack providing heating for four days,” she said. Ibrahim said campaigners are still giving away large quantities of firewood, along with complete food baskets for 500 families. “The campaign created a support network amongst many friends of the organisation who, in turn, reached out to volunteers in Arsal and the north in order to deliver firewood and food to the refugees,” she added.