×
MENUMENU
Donate
MENUMENU
Home / Humanitarian News / Lebanon and the U.N. have launched a plan that calls for an estimated $2.1 billion

Lebanon and the U.N. have launched a plan that calls for an estimated $2.1 billion 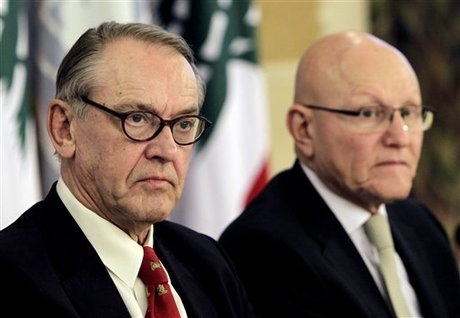 he Crisis Response Plan for Lebanon announced Monday outlines the priorities of the government and international community over the next two years. It aims to deliver humanitarian assistance to Syrian refugees while also expanding plans to invest in services and institutions in the most affected areas. It hopes to reach some 2.9 million people, half of them Lebanese. The plan was launched at the Grand Serail in a ceremony attended by Prime Minister Tammam Salam, U.N. Deputy Secretary-General Jan Eliasson, Lebanese and international officials and a number of foreign ambassadors. The plan aims to “consolidate stability in the country during this critical phase.” Hailing the Lebanese people’s hospitality, Eliasson noted that Lebanon is facing a burden that no single country in the world can cope with. He urged the member states of the U.N. to show solidarity by boosting their aid to Lebanon and its people. Salam meanwhile lamented “the insufficient financial support” that has been offered to Lebanon, while noting that the international community has also failed to take “practical measures” to assist Lebanon in the face of the growing security threats. “We hope the Crisis Response Plan for Lebanon will be more than just an alarm, but rather a roadmap that allow donors to focus on certain sectors in order to make the needed difference,” the prime minister added. Social Affairs Minister Rashid Derbas had said in comments published Monday in al-Liwaa newspaper that “37% of the donations will be spent on the structural and financial support of the country, while the remaining 63 percent will be used to aid around one million poor families on Lebanese soil — both Syrian and Lebanese.” The minister pointed out that several ministries are participating in the plan in cooperation with the United Nations Development Program (UNDP) and the U.N. refugee agency UNHCR. According to Central Bank of Lebanon statistics, the country faces a financial burden of $4.5 billion because of the refugee crisis. Derbas told the daily that the government is seeking to avert the repercussions of a decision by the United Nations to suspend food aid to 1.7 million refugees due to lack of funds, revealing that Saudi Arabia pledged to aid Lebanon in this regard. Around 700,000 Syrian refugees in Lebanon rely on the U.N. aid. The suspension is particularly troublesome for Lebanon, which hosts more than 1.5 million Syrian refugees. There are no formal camps. Many of the refugees live in encampments, collective shelters and abandoned construction sites. Many make out a living hand-to-mouth on U.N. cash aid and food vouchers. In December, the U.N. World Food Program suspended an electronic food voucher program serving refugees, saying donors failed to meet their commitments. The end of the program, which allows refugees in Jordan, Lebanon, Turkey, Iraq and Egypt to buy food in local shops, means that “many families will go hungry,” the U.N. agency said in a statement. The WFP said it needed $64 million (51 million euros) to fund its food voucher program for December alone and that “many donor commitments remain unfulfilled.” The move is a devastating blow to the conflict’s most vulnerable refugees, particularly ahead of what promises to be a harsh winter. It also represents another manifestation of the world’s failure to deal with the massive human catastrophe begun by Syria’s civil war. Lebanon has all but shut its frontiers to new refugees, allowing only humanitarian exceptions across, and the state is beyond its absorption capacities and urgently needs other countries to share its burden.