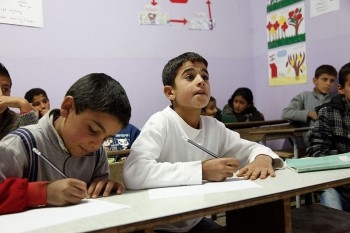 Education Minister Elias Bou Saab warned Tuesday of the high risk of Syrian, Palestinian and Iraqi refugee children of becoming radicalized or turning to a life of crime if left untaught. He said Lebanon is committed to ensuring that no child on its soil remains illiterate. “We are with the return of the refugees to their country at the earliest opportunity, but as long as they are on Lebanese territory, we are committed to putting them in schools,” Bou Saab said at a conference in Le Royal Hotel in Dbaye, north of Beirut. “Students who are absent from school for three years, we will see a generation [that is] uneducated and [which may] lead to extremism and crime,” he cautioned. Bou Saab was addressing ambassadors and representatives of donor countries and international organizations and institutions providing assistance in the education of refugee children from Syria, including Palestinians, as well as from Iraq. Lebanon is overwhelmed by more than 1.2 million Syrian refugees, more than a quarter of the population, who fled the neighboring war. The U.N. planning figures for 2015 cite the number of Iraqis in Lebanon at 6,100, while Social Affairs Minister Rashid Derbas said the number was around 8,000, as of August. “The problem is more than Lebanon can handle alone,” Bou Saab lamented.