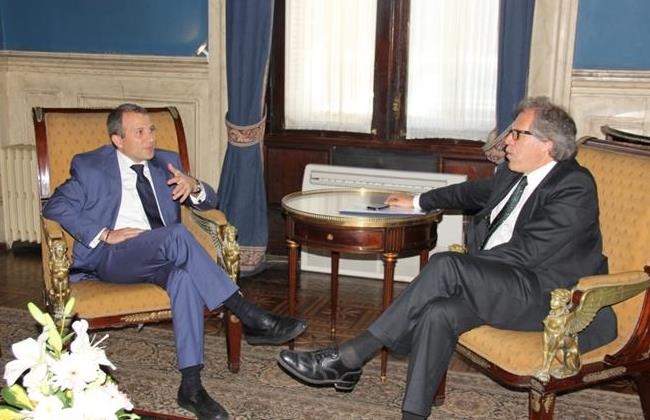 Foreign Minister Gebran Bassil discussed Friday the Syrian refugee crisis with his Uruguayan counterpart, thanking the Latin American country for accepting 42 Syrian refugees from Lebanon. “Uruguay has taken a positive step by receiving 42 Syrian refugees,” Bassil said after visiting Uruguay’s Foreign Minister Luis Almagro in the country’s capital, Montevideo. Bassil hailed Uruguay’s move as a way of maintaining “humanitarian communication with Lebanon,” and said it set a good example for other countries to follow. “We are in agreement that Uruguay’s, or any other country’s reception of refugees… is not a solution for the Syrian crisis,” he added. “The [solution] rather lies in keeping the Syrians in their own country and this can only be achieved through a peaceful, political solution in Syria.” Almagro in turn praised Lebanon for its “humanitarian approach” in dealing with the huge flow of Syrian refugees, saying many countries could learn from its experience. Bassil and Almagro also discussed the possibilities of enhancing economic trade between the two countries, acknowledging the presence of at least 90,000 Uruguayan citizens of Lebanese origin. The Lebanese minister said while his country imports a good amount of products from Uruguay, the size of its exports to the Latin American nation is “very minor,” stressing on the need to achieve relative balance. Bassil also gave a lecture at the Uruguayan foreign ministry, titled “The Foreign Policies of Small States.” The lecture was attended by Lebanese and Uruguayan diplomats and scholars. – See more at: http://www.dailystar.com.lb/News/Lebanon-News/2014/Dec-19/281667-lebanon-fm-hails-uruguay-for-accepting-42-syrian-refugees.ashx#sthash.4aegJRqZ.dpuf