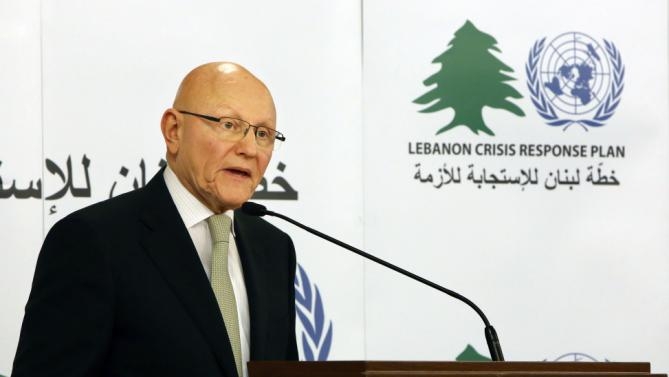 Prime Minister Tammam Salam announced Monday the finalization of a government plan that seeks to address the effects of the Syrian crisis on Lebanon, as he slammed the international community for lacking in its support for Beirut. The 2015-16 Lebanon Crisis Response Plan launched to deal with the more than 1.2 million Syrian refugees the country is hosting is a result of joint efforts between the United Nations and concerned ministries, and “aims to counter negative consequences” accompanying the spillover effect of the Syrian crisis, Salam said during a speech delivered at the Grand Serail. Salam expressed hopes that the plan would serve as a “road map that would allow donors to focus on specific sectors” when pledging funds to Lebanon. He said that donations should not be restricted to humanitarian assistance for refugees, and called for aid to also target Lebanese host communities. The prime minister noted that an assessment of the damages the crisis has caused various Lebanese sectors paired with an evaluation of short-term potential risks, have revealed that enormous financial resources are needed to deal with the issue. Despite an international recognition of the need to help Lebanon bear the heavy burden of the Syrian crisis, “the actual financial support that we received was very low in comparison to the required size of support,” Salam said, noting that the Syrian crisis has contributed to the rapid deterioration of the economy, infrastructure and public services. According to Salam, the international consensus over the risks to Lebanese stability and security “has not been translated by the international community into practical measures that are proportional to the size of the threat.” Social Affairs Minister Rashid Derbas had earlier said the plan aimed to raise 37 percent of the total financial support from donor states who have pledged to help Lebanon restore economic stability. “This financial equation was based from the road map that had been prepared by the government for the financial needs of the Lebanese people, and to provide financial support to the sectors of education, health, electricity and others,” Derbas told local daily An-Nahar in remarks published Monday. He warned of the consequences if the U.N.’s World Food Program suspended food aid for Syrian refugees. “The government has been able to secure financial support from Saudi Arabia to cover the expenses of the food supply for Syrian refugees for December,” Derbas said. A lack of funds forced the U.N. to briefly stop providing food vouchers for 1.7 million Syrian refugees in Jordan, Lebanon, Turkey, Iraq and Egypt earlier this month. However, a 72-hour fundraising campaign raised the needed funds for December, the WFP announced last week. Lebanon hosts around 1.2 million registered Syrian refugees, but unofficial figures are much higher. Their presence is putting enormous pressure on the country’s ailing infrastructure. Ross Mountain, the U.N. resident coordinator in Lebanon who met with Derbas Monday over the road map, highlighted the burden the refugee crisis is placing on the Lebanese, saying more aid must directed toward the needs of Lebanon. Mountain said that the plan will focus on securing aid for those who are in “dire need.” The program will also increase the provision of basic aid through local municipalities and host communities where the demand is highest. The plan will also seek to address the mounting pressures on Lebanon’s economy by securing new jobs and investing in the skills of the youth, he added. Mountain stressed that “more than 77 Lebanese and international organizations gathered under the leadership of the Lebanese government to get the program going.