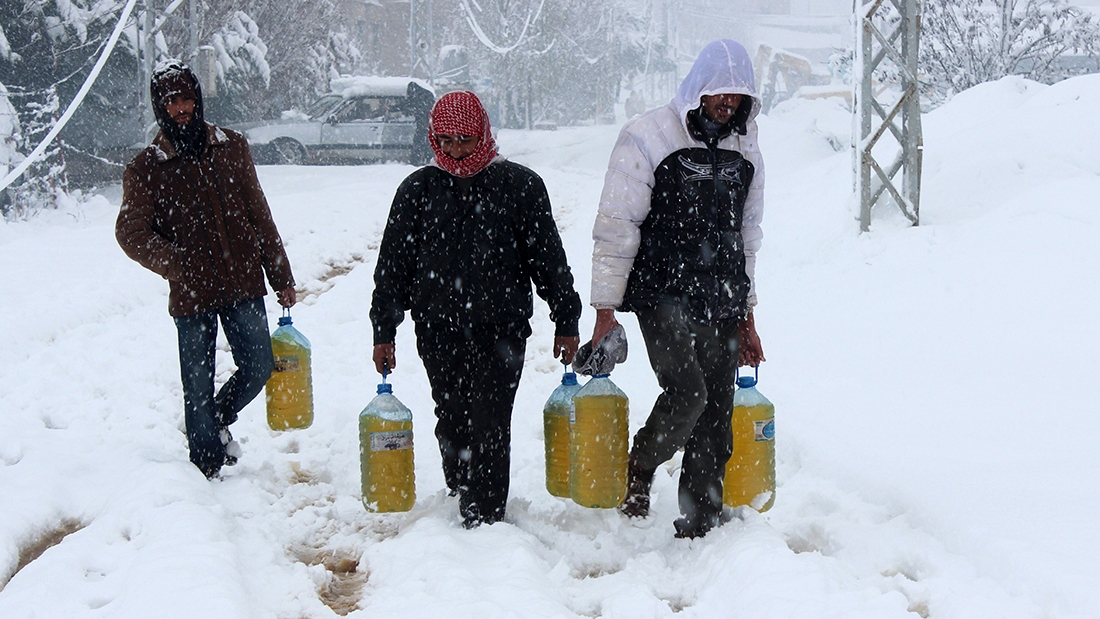 Rawda, her husband and eight children were in their makeshift shelter of tin and timber and the wind was tossing the plastic coverings so loudly that none of them could sleep. Then a strong gust blew in and rattled the roof above them, sending a large wooden beam falling down next to them. “It landed just a few centimeters away from my son’s head,” says Rawda, who fled from Syria to Lebanon three years ago. “Now, he sleeps next to me at night and I don’t let him go.” Two-year-old Khalid almost became the latest victim of a harsh winter storm that is causing havoc for the roughly 1 million Syrian refugees living in poorly built shelters in Lebanon. The storm has brought snow, high winds, rain and freezing temperatures, piling misery on refugees already suffering a difficult winter. Local press reported the deaths of four Syrians due to the cold over the past week, among them a 2-month-old baby who died Thursday night. Many do not have the enough blankets to keep warm, and there have been reports of families burning their clothes to keep out the cold. “The storm has hit Lebanon hard, and Syrian refugees living in informal settlements in Lebanon have been among the most affected, with damaged tents and snow-blocked roads preventing them reaching the food, clean water and fuel that they need to survive,” says Fran Beytrison, Oxfam’s country representative for Lebanon. In the Bekaa Valley to the east, hundreds of tents have been covered in a blanket of snow, in some places stranding those inside for days. Here in the town of Chekka, in northern Lebanon, powerful coastal winds have smashed shelters and kept inhabitants awake at night. Just down the road from Rawda’s encampment, 18 families live on a patch of industrial land adjacent to a small field of olive trees. A large nylon factory casts its shadow over the camp, which is close enough to the coast to feel the bitter chill of the sea winds. Heavy rainfall over the past few days has turned much of the site into a muddy puddle. Many of the children are without proper shoes, wearing only sandals. Saher, a mother of three from Idlib province in Syria, stands next to her home made from sheet metal and wooden pallets and recounts the worst night of the storm, two nights ago. “The wind was so strong it shook the whole tent and scared the children. My daughter was very afraid and hugged me all night. They cannot sleep because of the noise it makes,” she says. The floor inside her shelter is wet from the previous night’s rain, and mud stains the bottom of the cushions they use as beds. She produces a small camping stove covered with a tin to protect it from the wind. “This is all we have to heat the tent. It is not enough.” Her children hang around close to her, looking tired and every one of them with a runny nose. Two shelters that were standing a few days ago now lie crumpled on the ground — some of the supporting beams already chopped up for firewood. Another has its roof blown off. The previous inhabitants have left to find shelter with friends. Maria, a widow and a grandmother from Qamlishi, in northern Syria, was inside her shelter when it began to fall down around her. On Tuesday evening, the side of her home came in and the plastic coverings protecting her from the wind were sent flying off into the darkness. Her screams woke up everyone nearby and several men from the camp rushed up to repair the structure before it fell. “It was almost completely destroyed,” she said. “I would prefer to live in Syria with the bombs than in conditions like this.” “I want to grab the soil of my home.” Roughly 1.2 million refugees are registered in Lebanon — that’s equivalent to a quarter of the country’s total population. Aid agencies believe the actual number of refugees in the country is much higher. There are no official refugee camps in Lebanon. Instead, refugees are scattered across the country and make their home on whatever patch of land they can find. Some make arrangements with landowners before building their shelters, others build and then wait for their landlords to arrive, asking for rent. This will be the fourth winter many of them have endured since fleeing the devastating war in Syria, and their predicament has grown progressively worse as the conflict has dragged on. The influx has put a strain on the local population as they now have to compete for jobs and resources with a greater number of people. Some local authorities have imposed curfews for Syrians, while violence towards refugees has been increasing. Fearful of not being able to cope with any more refugees, the Lebanese government recently imposed new restrictions on Syrian refugees crossing its border. In the meantime, the ones that have already made it here are worried for the future. Even before the storm, some families were struggling to survive. Hamida and her family left Aleppo more than two years ago. Her husband cannot find a job because he doesn’t have the correct papers, so her 14-year-old son provides by working on a construction site, where he also lives. But the money he earns is not enough. Her other children are forced to scavenge for firewood anywhere they can find it — in bins or by the side of the road. “All my children are sick, but I cannot afford medicine to treat them,” she said, before uttering a sentiment expressed again and again from the people living here. “No one wants to live like this. In Syria we had barrel bombs falling on us, but even that is better than what we are going through now.”