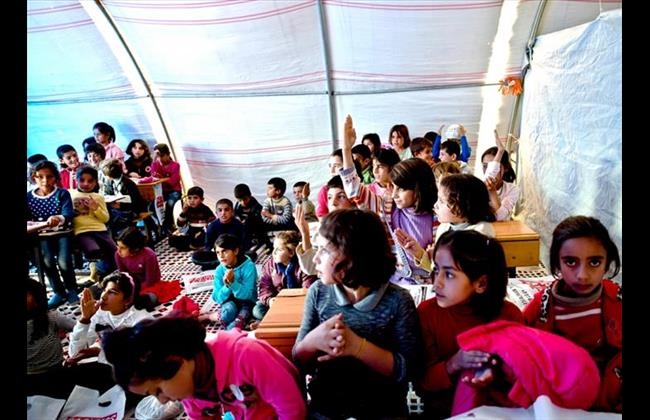 It’s only a blue tent at the back of a refugee camp in the Turkish border town of Suruc. But for dozens of children who study in the makeshift school, it’s a glimmer of hope. Inside, brightly colored drawings are pinned to the plastic walls, and wooden desks stand in two neat rows. For some of the Kurdish kids who fled with their families from the besieged Syrian town of Ain al-Arab, known in Kurdish as Kobani, this is the only school they’ve known. “The whole world was collapsing, how could they go to school?” said Ghazi Mammo Darwesh, father of 7-year-old Diyala. The shy, brown-eyed girl says she likes learning Kurdish, writing and drawing pictures of flowers and girls. Her father is overjoyed that, at last, she is learning something. “How can I not like it? I can fly for happiness. I hope that my children will study abroad,” said Darwesh, who has seven children. School also provides some psychological support for traumatized youngsters, who have lost their homes and often-family members during a ferocious onslaught by ISIS militants on Ain al-Arab that began in mid-September. The lessons are basic – only reading and writing in Kurdish is taught, and only for the ages of 7-10. But children, parents and teachers agree it’s better than nothing. “It’s very important for the children to be in school and concentrated on education instead of having flashbacks to the war,” said Rukan Sheikh Mohammad, a 19-year-old teacher who is a refugee from Ain al-Arab herself. The war, she said, had deeply affected the children. “We teach the students to try to provide some confidence, motivating them and telling them they will go home one day and all will be well.” The school where Mohammad teaches was set up about three weeks ago. In a nearby camp, volunteers initially began organizing simple activities to keep the refugee children occupied, but soon decided to try a more formal education. The Viyan Amara school, named after a woman who was killed fighting in Ain al-Arab, started classes a few days ago. Volunteer teacher Eidan Kanlibas said the school is funded solely by charitable donations. For now, she added, they only have enough materials for rudimentary lessons. “In the beginning we were doing activities and getting the children to do drawings,” Kanlibas said as she carried newly donated desks into the tent-school, with some of the camp’s older children rushing over to help. “They were doing drawings of beheadings and weapons. The fear they saw was reflected in their drawings,” she said. “Now, you can see they are smiling and recovering from the things they saw and the pressure of war.” Diyala’s friend, 7-year-old Shirin Ahmad, had been registered to go to school in Ain al-Arab, but the war broke out and she never made it to first grade. Now, she has started school in the camp where she lives with her two younger brothers and parents. “This school isn’t enough, of course,” said Shirin’s mother, Warda Ahmad. “But at least having this is better than illiteracy.”