Merciless and hopeless reality for Syrian refugees in Turkey 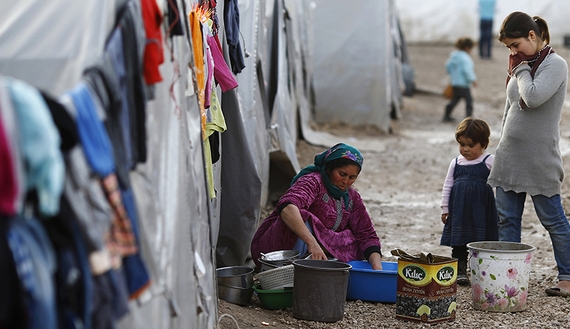 We are facing the worst refugee crisis of the world of recent years. But as we don’t discuss it, we don’t really know the dimensions of the crisis. There are 1.6 million registered Syrian refugees in Turkey. This corresponds to a 2.1% increase in the national population. Amnesty International in a 2014 report on survival struggle of the Syrian refugees says Turkey’s assuming the financial burden of the crisis is crucial. Nevertheless, tens of thousands of refugees live in extreme poverty. There are many others turned back from the border, and even risk being shot at with real bullets. Massive smuggling economy Andrew Gardner, a researcher on Turkey at Amnesty International, says, “Most of the Syrian refugees who escaped from the war are confronted with a merciless and hopeless reality. They have been abandoned by the international community.’ True, Turkey officially executes an “open door” policy. But those who don’t have a passport are not allowed through official crossings unless they need urgent medical attention or have critical humanitarian needs. That is why many refugees are forced to use dangerous and difficult unofficial passages far from official crossings. In many cases refugees rely on smugglers to cross into Turkey. These irregular crossings are very dangerous because they are usually in minefields. Armed groups who cross to Syria to fight also use those crossings. Along the border there is an active human trafficking economy. There is also lucrative smuggling industry of fuel, cigarettes, food stuffs, spare car parts and weapons. No assistance to 1 million people Turkey established 22 camps to house more than 220,000 refugees and provided them with food and basic services. But the camps are full and at least 1.3 million Syrians are living outside the camps. According to Turkey’s official Disasters and Emergency Management Department [AFAD], humanitarian nongovernmental organizations provide assistance to only 15% of those living outside the camps. That means more than 1 million people are left to their own devices to survive. One of the major problems is the stiff restrictions on activities of civil society organizations. A non-transparent and complicated registration process that could take years to complete is imposed particularly on international civil society organizations. Those who have not done their registration are not allowed to distribute assistance to Syrian refugees and they are asked to hand over their relief supplies to official AFAD. The drama of Syrian refugees is not only escaping from the war. Amnesty International’s report Amnesty International has documented killings of at least 17 persons by border security units at unauthorized crossings between December 2013 and August 2014. Amnesty submitted a preliminary report to the Ministry of Interior covering these deaths and witness accounts of the incidents of beatings of refugees. There has been no response from officials. In October 2014, 300 refugees from Kobani were kept for 15 days in a sports hall in Suruc across the border on Turkey. These people have said they were interrogated one by one and were treated badly.