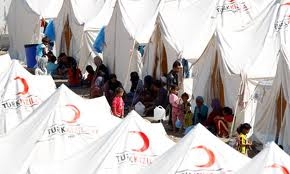 More than a million Syrian refugees in Turkey may go without food, medicine and shelter unless there is an increase in international funding, the U.N. refugee agency said on Wednesday.

Turkey was already struggling to cope with the refugees before the attack on the border town of Kobani began, and the inflow has now far exceeded the international support Turkey has received, a UNHCR (UN High Commissioner for Refugees) spokeswoman said.

More than 180,000 residents of Kobani, a Syrian Kurdish town, have fled to Turkey as fighters of the militant Sunni group Islamic State closed in over the past three weeks.

Carol Batchelor, the UNHCR representative in Turkey, said there was a global responsibility to look after the refugees.

“The basic needs of the Syrian refugees vastly outweigh the support and funding from the international community,” Batchelor told Thomson Reuters Foundation.

The majority of the 1.5 million Syrian refugees in Turkey live outside refugee camps, and Batchelor said this was one of the biggest challenges facing the country.

“While there are 22 refugee camps hosting 220,000 people across Turkey, this means more than a million Syrians are in temporary shelters like mosques, schools and parks,” Batchelor said in a telephone interview from Ankara.