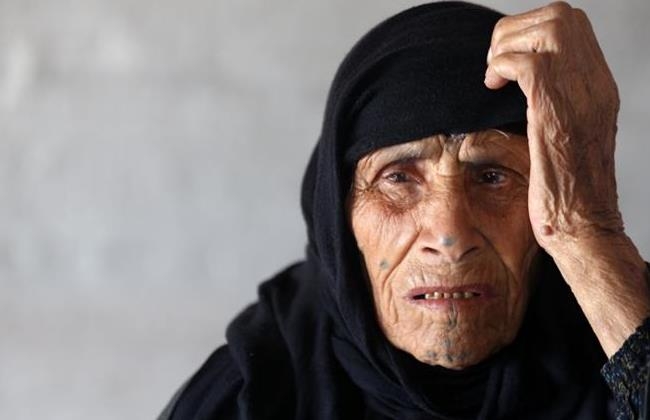 Saada al-Jomaa’s tears flow down her cheeks whenever she is asked to remember. At 102 years of age, she is one of the oldest Syrian refugees displaced by the war into Lebanon – from a century in her village in Raqqa to spending her twilight years in a feeble, plaster tent where her family sometimes has to burn shoes to shield her from the biting cold of the Bekaa Valley. “What do you mean what do I remember?” she asks between tears. “My home, as dear as my eyes. I remember it all. You don’t forget your home that you toiled for.” “But God is generous, God will sort it out,” she adds. “I just miss my country.” Saada and her family fled from Tabqa, a village in Raqqa province, almost three years ago as the revolution in Syria spread to their region. The family of 13 drove to Lebanon, before the violence had engulfed more of the country and severed the roads. There are now more than a million Syrian refugees in Lebanon, according to the U.N. High Commissioner for Refugees. Earlier this year, UNHCR identified 12 centenarians among Syria’s oldest refugees, many of them residing in Lebanon’s Bekaa Valley, home to the bulk of displaced people from the conflict across the border. Their ages were verified on their Syrian national ID cards. The stories of these oldest refugees are a testament to the fragility of the lives of many who fled the conflict in Syria, and the radical shift in fortunes from century-old homes to bare plaster tents in crowded settlements with little shelter or food in the area’s harsh winter. Saada is less lucid now, suffering from brain atrophy that has weakened her and left her prone to random outbursts, in addition to weakening her memory. When her family told her about the death of one of her daughters, she had forgotten about it the next day. Her eyesight is also much weaker, and her health has rapidly deteriorated since the summer. But she speaks with more clarity about her home, far away. “What do I have there to return to?” she says when asked if she would like to go back. When she struggles to answer, her son, Issa al Mohammed, picks up the trail. He remembers most of her stories of youth, carrying pails of fresh water from the Euphrates on their donkeys, sleeping on mats on the roof in summer, Saada carrying the family haul from the vegetable market, balanced in baskets on her head. “She was strong,” he says. “We had a good life. It was a country life, not a city life.” “I wish it all went back to the way it was,” replies his mother, seated a meter away, wrapped in blankets, her face lined with stories of ages past. Issa says the family is suffering in the cold winter. He has had to borrow money to buy diesel and firewood to keep them warm, and even then they sometimes have to burn old shoes to save money. He says they did not receive winter supplies this year. “It’s hard to even get out of the tent and walk,” he says. His family makes little money – he is barred from working and is himself old with heart problems. Two of his daughters work in farms for anywhere between LL6,000 to LL10,000 a day, hardly enough to augment their meager food supply, and there is less work in the winter months. His mother Saada is particularly vulnerable. “She really suffers, you see her covers, we have to do everything we can [to keep her warm],” he says. But it is hard to restore her dwindling strength, her food limited due to the high cost of fried potatoes, labneh and some greens. They can barely pay their share of her health care. Ahmad al-Jassem, however, is more lucid, though also weakened by age and the biting cold. The 102-year-old refugee, from Hora in Raqqa, smiles more freely. He laughs more often, too. “I’ve gotten old, my hearing has become weak,” he says, sounding jovial nonetheless. He laughs that he does not quite remember the day he left Syria, because he’s over a hundred years old, but he wishes he could have stayed. “I wanted to stay in the area. It’s our soil, our forefathers, but Alhamdulillah,” he says, using the phrase offering thanks to God in good and hard times. “It’s these times.” Though he has nobody in Raqqa anymore, since the whole family has fled, he says he still misses his house. “Remember it? It’s home, familiarity,” he says. “If I stay healthy I will see it again, God willing.” The former farmer and shepherd says he often visited relatives in Lebanon when he was younger, but laughs now that all his family has relocated to Lebanon. “Now everyone is here,” he says. Like Saada, the winter has taken its toll on Ahmad. His knees have weakened in the cold. “I no longer have strength, I’ve aged a lot,” he says, laughing again. “And the memory has gone.” – See more at: http://www.dailystar.com.lb/News/Lebanon-News/2014/Dec-19/281601-oldest-syrian-refugees-living-twilight-years-in-destitution.ashx#sthash.UJ8I044J.dpuf