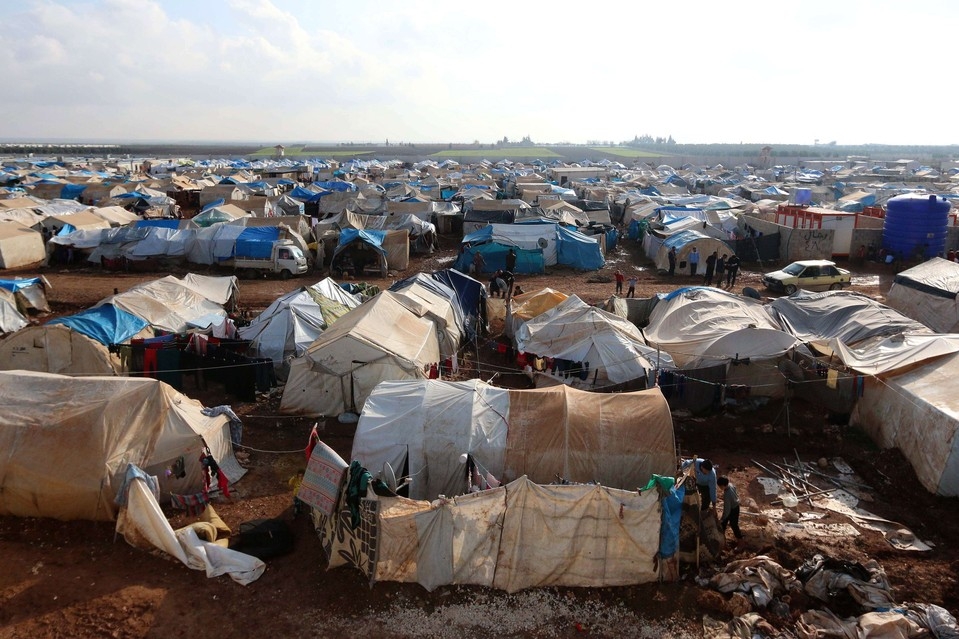 urkey’s welcome to Syrian refugees is coming under strain, as international aid dries up and Turks grow weary of the burden to their country caused by the 1.7 million people who have spilled over the border to escape war next door. On a recent night here, dozens of Syrian men lined to use the only bathroom in a commercial building that once housed offices and workshops, but now shelters homeless Syrians, who pay $240 a month for a bunk bed in one of its 30 rooms. With nighttime temperatures dropping to the 30s, the building’s Turkish owner lets residents buy portable heaters, but he limits their use to save electricity. It is a sign to Mohammed Darweesh, a 31-year-old doctor from the Syrian province of Latakia, that Turkey’s embrace was wearing thin “One night, local volunteers knocked our door and offered blankets. I told them our problems are too great to be solved with blankets,” Mr. Darweesh said, adding that his money was running low and he was unable to get a job. “Turkey has been good to Syrians, but two million people are just too many.” Since the start of Syria’s political upheaval in March 2011, Turkish authorities have sought to control the dispersal of Syrian refugees across the country by giving government aid only to people in camps it operates near the Turkish-Syrian frontier.But the duration of the war and the scope of the displaced—including 1.1 million U.N.-registered refugees and hundreds of thousands of others Turkey’s government says the U.N. hasn’t yet counted—has overwhelmed that strategy. Fleeing Syrians have overflowed the government’s 23 camps and spilled into every corner of Turkey, not least its cities, which Mr. Darweesh and others believe provide more means to survive. Donor fatigue with Syria and competing international demands for humanitarian aid are now making the burden of Turkey’s open-door policy untenable, both for the refugees and their hosts. Turkey says it has spent $5 billion on Syrian refugees, while receiving only $265 million in international support despite pleas for more. Meanwhile, the World Food Program said this month that due to lack of funds, it was suspending a food voucher program for Syrian refugees. Within days, the U.N. agency managed to raise $80 million to keep the program going, at least temporarily. “We can now continue to run the program until mid-January. But after that, we will have to again see where we’re at,” said Jean-Yves Lequime, the WFP’s emergency coordinator in Ankara. Turkey has received international plaudits for its care of the refugees, providing free health care and state scholarships for university students, in addition to food and shelter. But in Turkey’s cities, the once hospitable climate to Syria’s refugees has become tinged with impatience, and sometimes hostility. While many Syrians are working as day laborers to make ends meet, some have resorted to begging on the streets to make do. For months Mevlut Tanrioglu watched with growing dismay as Syrian families lingered in front of his snack shop in Levent, Istanbul’s business district, and pleaded for money from passersby. By the time police began in October to round up the families this fall as part of a wider operation in Istanbul, Ankara and other Turkish cities, the 68-year-old Mr. Tanrioglu had little sympathy left. “Of course it’s all upsetting. They’ve lost everything. But the more we take them in, the bigger the problems will grow. Turkey’s door should be shut for them,” he said. As part of the roundup, police picked up 1,300 homeless Syrians and moved them to a camp in Gaziantep, newly built for the most vulnerable among Syria’s refugees, said an official of the government’s Disaster and Emergency Management Directorate, or AFAD. Rights groups report a shift in attitudes, too. Amnesty International said last month that Turkey is employing forces to bar an increasing number of Syrians from crossing the frontier into Turkey. Turkish officials said there have been no changes to the country’s refugee policy, and said that some Syrians have been turned back at the border because they lacked sufficient identification. Few doubt Turkey’s burden. Government-run refugee camps, located mainly in the south, now house more than 225,000 Syrians. A 24th camp is under construction near the southern city of Suruç to handle what the government says are an additional 190,000 people who have fled the Syrian border town of Kobani since Islamic State and Kurdish forces began fighting there in October. “Just as we haven’t let these people go hungry for the past four years, we won’t let them go hungry in the future,” said AFAD spokesman Dogan Eskinat, while reiterating the government’s need for outside aid. Domestic aid groups are being stretched to the limit, too. Sefkat-Der, a nongovernmental organization that delivers soup and bread to the homeless in Istanbul, says it fed a record number of Syrians on the streets—some 50 people a night—in November and early December. The group’s volunteers said it is common to see Syrians sleeping in parks and in makeshift tents near the central bus station, and even on the outdoor stage next to the famed Blue Mosque. “Turks have got used to Syrians on the streets. Their children cling to us on the street, begging,” said Serkan Bulut, a 22-year-old volunteer for the group. “We want to help, but there are so many.”