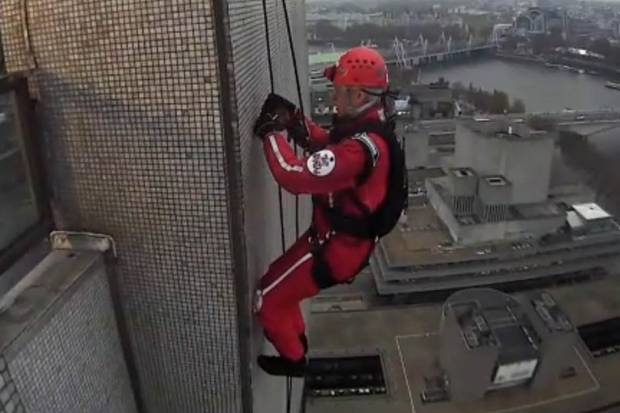 TV presenter Phillip Schofield clambered down the side of a London tower block to raise thousands for charity. The host of This Morning abseiled down ITV’s headquarters in the Southbank as thousands watched chanting in support. Schofield took on the challenge as part of his efforts to broadcast continually for 24 hours as part of ITV’s Text Santa charity appeal. The 52-year-old braved a drop of 22 floors on a rope as a brass band played 12 Days of Christmas. He had also been set the task of remembering a number of objects held by celebrities as he plummeted past a number of storeys, and after recalling each of them he managed to raised £12,000. The star admitted he was finding the experience a little hard to take, as he told viewers during the descent: “This is freaking me out now.” And as the relieved presenter came back down to earth he loosened his harness and confessed: “It’s a bit tight on my crackers.” Christine Bleakley embraced the star and told him: “You are fantastic – look at your cold cheeks.”