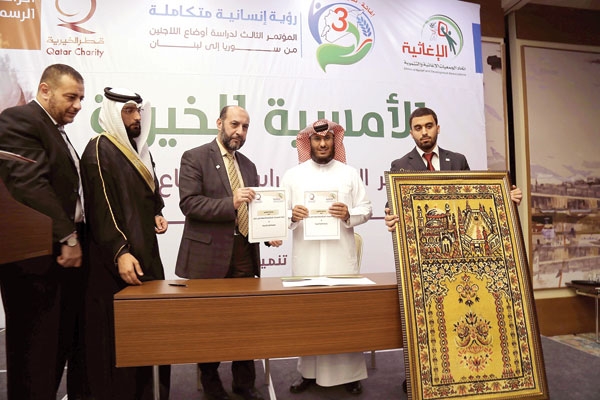 rojects will be implemented by QC and partners, including Islamic Dawa Organization and Human Appeal, in collaboration with Federation of Relief and Development Organisations in Lebanon. They will focus on health, shelter, food and emotional support. The announcement was made during a charity evening on the sidelines of the third conference in Istanbul earlier this month to study the situation of the Syrian refugees in Lebanon. QC has allocated QR16.425m for a model village as part of ‘Ray of Hope’ programme, implemented by the federation. The programme includes QR1.825m economic empowerment project ‘Support Productive Families’ to provide basic necessities to Syrian refugees in Lebanon. About QR1.825m was also provided to support a medical fund to provide medicines and treatment for sick and wounded Syrian refugees in Lebanon. QC is supporting ‘Smiles’ programme which provides psychological support for children, at a cost of about QR220,000. QC also allocated about QR2m for ‘Five Fingers’ programme to develop Rabbit Valley, Al Hosn Valley, Atta Valley, Babain and Wara ul Hafr in Arsal where there are most Syrian refugees. The Peninsula