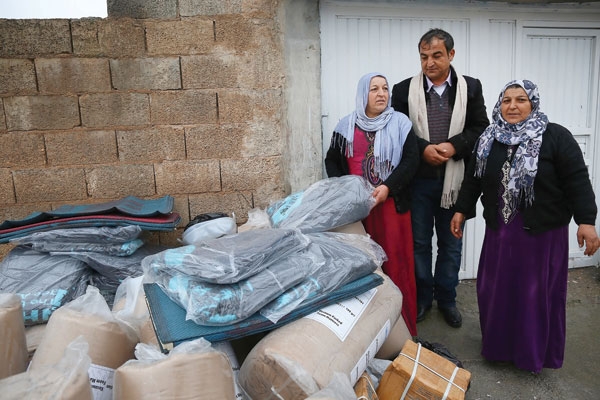 Qatar Red Crescent (QRC) Office in Turkey has resumed implementation of the winter relief programme for the Syrian refugees in the country. The programme was launched last winter following directives of Emir H H Sheikh Tamim bin Hamad Al Thani to provide urgent winter assistance to refugees. Represented in Qatar Development Fund, Qatar offered a grant of over $30m of which $20m was for Syrian refugees in Lebanon and $10m for the Syrian refugees in Turkey. QRC was assigned the task of supervising the programme and delivering the assistance to eligible beneficiaries. From the very beginning of the winter, distribution was resumed in refugee camps in Turkey under QRC supervision, in cooperation with the Office of UN High Commissioner for Refugees (UNHCR), as per an agreement signed by both in February 2014. According to the deal, QRC purchases $10m worth of relief items in accordance with international standards and UNHCR distributes them to refugee families in Turkey. About 7,000 tents were supplied to UNHCR warehouses to be distributed to the inhabitants of five refugee camps throughout Turkey. Another agreement was signed last month to distribute additional 3,000 tents. Also, 315,000 blankets were distributed to non-camp Syrians registered with UNHCR in eight provinces, totalling 354,745 refugees. About 95,000 blankets were distributed in Gaziantep, 83,100 in Urfa, 60,000 in Hatay, 20,000 in Kilis, 30,000 in Mardin, 13,000 in K Maras, 8,900 in Osmaniye and 5,000 in Adana. Saleh bin Ali Al Mohannadi, Secretary-General, QRC, said: “QRC will continue to fulfil its commitments and stand by our Syrian brothers in their calamity. “We will spare no efforts to alleviate the suffering of Syrian refugees until they return home, enjoying security and dignity.” The influx of Syrians into Turkey has surpassed initial projections. According to a recent survey by Disaster and Emergency Management Presidency, the main government agency responsible for the Syrian operation, about 36 percent of refugees in Turkey are in camps in 10 provinces in the south and southeast of Turkey, while the remaining 64 percent are living in cities across the country. The number of refugees in camps is over 202,000. To date, over 313,000 non-camp refugees have been registered, although the Turkish government estimates that the number is significantly higher. Refugees living outside camps face enormous challenges in accessing essential services and very often their living conditions are substandard. More refugees are expected to arrive, which poses major challenges to Turkish authorities and humanitarian organisations. Additionally, this will increase the economic and social burden on the host communities. 