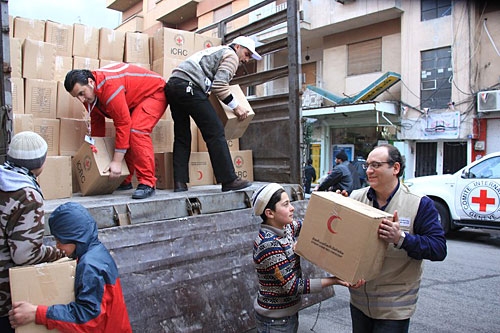 The International Red Cross and Red Crescent Movement is shocked and saddened by the deaths of two Syrian Arab Red Crescent (SARC) volunteers. Ikhlas Ibraheem al-Sulaiman and Muhammad Ahmad Othman, of the Homs Branch, were killed on 7 November. Ms al-Sulaiman and Mr Othman were killed when a mortar shell hit a civilian area of Homs. They were transporting supplies to be used as part of a joint SARC-UNICEF psycho-social project that helps children traumatized by the conflict. This tragic loss highlights the reality for SARC volunteers who are based within communities and exposed to the same risks as the people they are helping. Sadly in this attack a number of civilians were also killed and injured. In total, 40 SARC aid workers and seven Palestine Red Cresecent Society volunteers have lost their lives since the beginning of the conflict in Syria, all of them killed while carrying out their humanitarian duties. The British Red Cross has been supporting the work of SARC volunteers through the Syrian crisis appeal we are also part of the International Red Cross and Red Crescent Movement, which is calling upon all parties involved in the conflict in Syria to spare all civilians and refrain from targeting civilian areas. Furthermore, the Movement calls on all parties to respect the work of the Red Cross and Red Crescent, and guarantee the safety of aid workers and their unimpeded, immediate access to people in need across the country. The Movement expresses its heartfelt sympathy to the families of Ikhlas Ibraheem al-Sulaiman and Muhammad Ahmad Othman, and its full solidarity with SARC.