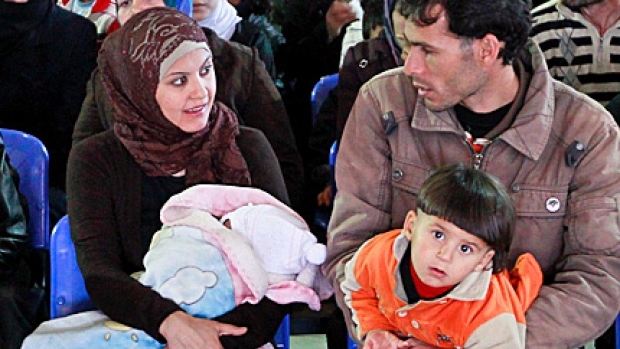 Right now in the Middle East, there are more than three million Syrian refugees living in fear, famine and poverty, searching for a place to call home. Here in Winnipeg, a small group of volunteers is determined to help at least a few of them. “We’re sponsoring three brothers, their wives and 24 children between them,” said Barbara Wynes of Refuge Winnipeg. “Just three families out of millions, I know. But at least we might be able to help them.” Refuge Winnipeg was formed after a member of Wynes’s church learned of a local family’s efforts to sponsor their loved ones living as refugees in Lebanon. But while the local family successfully relocated here years ago — they’ve got good jobs and have even become Canadian citizens — the challenge to sponsor the families was huge. “You need to commit at least $120,000 to sponsor the three families,” Wynes said. “You have to prove you can cover all of their expenses for their first full year here.” That’s why they decided to form a coalition in an effort to rally support for the cause. Within weeks, members from all walks of life — and faith — jumped at the chance to help out. By early fall, Refuge Winnipeg was formed, made up of members from Winnipeg’s Islamic, Syrian, Jewish, Christian and secular communities. The United Church of Canada and Westworth United Church agreed to be listed as the “formal” sponsors, and the federal government has officially approved the group. It is a daunting task but there’s a lot at stake, Wynes says, as refugee families are living in harsh conditions in the raw cold of winter, with little food or shelter. “They live in a shack that doesn’t have doors, they go in and out through the window,” she said. One child is an amputee, after being struck by a military vehicle back in Syria. The families have also been told they must start paying rent for their squalor, despite the fact they’re not allowed to work and have no access to an income, she said. Those are the struggles that are driving Refuge Winnipeg’s efforts, and they’ve already made progress. Already, the group has received commitments of more than $100,000 and gone through the laborious 150 pages worth of forms to fill out. That alone was a logistically difficult task and had to be as accurate as possible; any contradictions could mean an instant rejection of their refugee applications. “There were so many forms to fill out and we had to go back and forth with the family here to get information about the families in Lebanon,” Wynes said. “All the facts have to match.” Even then, there’s no guarantee their requests will be granted. This year alone, Canada has allowed just a few hundred Syrian refugees to come here, despite a prior promise to allow at least 1,300. And while the United Nations recently asked countries to commit to thousands more, critics say Canada has responded with virtual silence. Refuge Winnipeg, however, hopes sooner or later, they’ll help at least three of these families.