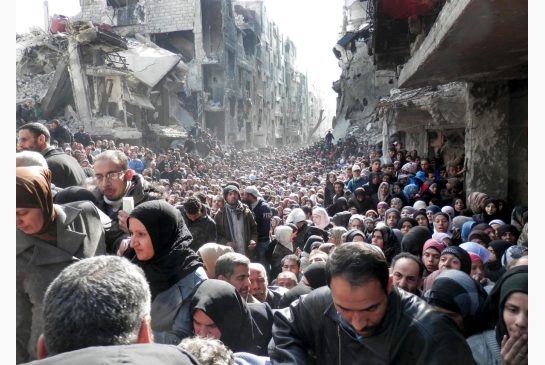 It’s been more than a year since the world was shaken and stirred by The Picture. A single image snapped by a UN aid worker and showing a sea of upturned faces, desperate and hungry, in the bombed-out remnants of Yarmouk captured the horror of Syria as never before. Social media did its thing, with tens of millions sharing the universal demand of humanitarian relief for the hardscrabble residents of the Palestinian refugee camp on the southern outskirts of Damascus. The image eventually made its way onto billboards in New York and Tokyo. Fast-forward to April 2015, and the grim reality is this: Your retweet didn’t help. If life in Yarmouk was hell then, it’s worse nowBombed. Besieged. Starved. Bombed again. And now, trapped in renewed conflict that began last week as Islamic State fighters surged into the sprawling camp from the south, the civilians of Yarmouk need a humanitarian corridor now more than ever. “For all the indignities the people of Yarmouk already have endured, the situation now is beyond inhumane,” Christopher Gunness, spokesman for the United Nations Relief and Works Agency (UNRWA), told the Star. “The level of depravity is truly shocking and has been since this latest round began. People too afraid to go outside, let alone take up the search for food and water. What’s important now is for people around the world to take on their own governments and drive up the pressure that they are heartily sick of watching this slaughter continueOne hopeful glimmer came Monday amid reports that as many as 2,000 of the estimated 18,000 inside Yarmouk may have slipped north to relative safety into Damascus neighbourhoods within control of the Assad regime. The Syrian Observatory for Human Rights pegged the figure at “hundreds” while UNRWA confirmed fewer than 100 evacuees. But other accounts suggest a campaign of fear has followed, involving beheadings by Islamic State militants as they mop up pockets of resistance within YarmoukWorld Food Program rations, which include flour, cooking oil, pulses, milk, sugar and some canned food, are readily available to the vast majority of Syrian refugees. But access to Yarmouk has been intermittent at best, with the camp choked off to prevent rebel forces seeking the overthrow of the Syrian regime. The outcome has been death by starvation for 166 children of Yarmouk, the Geneva-based group Friends of Humanity reported in February, accusing the Assad regime of deliberately blocking aid in order to force residents to flush out opposition groups controlling the camp.