Refugee-Run School In Egypt Supports Syrians Who Have Fallen Behind, Been Bullied

Syrian refugees are often harassed at public schools and don’t get the psychosocial support they need.

In an unfinished building on the outskirts of Cairo that echoes with the clatter of construction, a Syrian instructor walks a class of young refugees through a poetry lesson in the dialect of their war-torn country, hoping to instill knowledge and a sense of community far from home.

“When a Syrian teacher is in charge of you, he understands your situation,” says 19-year-old Muhammed Basil, who lost two years of schooling because of the war and then struggled to keep up in Egyptian schools.

“We have been cut off from education for a while, so the teacher needs to know where to start with us. We have something missing and we need a teacher that can fill that void,” he said.

Syrian refugees, who say they often feel unwelcome in Egypt, have gradually carved out a community of their own here in 6th of October, a Cairo suburb. They have moved into Syrian-majority neighborhoods and started businesses, and many are now enrolling their children in classes run by and for refugees.

Some 128,000 Syrian refugees are registered in Egypt, according to the U.N. refugee agency, but the actual number is believed to be much higher. There are no refugee camps in Egypt, so the vast majority live in dense urban areas alongside Egyptians. 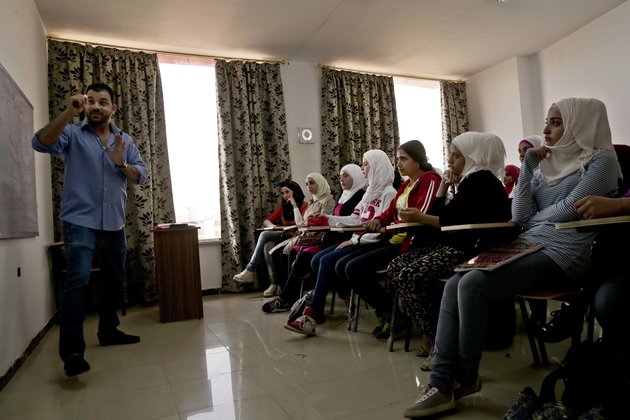 Tensions have eased since then, but life for Syrian refugees in Egypt remains difficult, particularly for children, many of whom are behind in school after missing months or years of classes because of the conflict. Egypt’s public schools are overcrowded and chaotic, and Egyptians speak a different dialect of Arabic that can be hard for some Syrians to follow.

The Civilization Builders Educational Center, where Basil attends class, is one of several centers in 6th of October established to provide a better learning environment for the refugees.

“Education is the most important thing for a Syrian who has left his country, so opening a school for them will give them knowledge, that when we go back to our country one day they can rebuild it,” said Tarik al-Harki, who teaches high school English at the center. The center, which opened this year, also teaches a small number of Iraqi, Libyan and Egyptian students, and has two Egyptian teachers.

The sounds of drilling and hammering from elsewhere in the unfinished building echo through the classrooms, and workers splattered with paint walk through the halls past brightly colored murals. 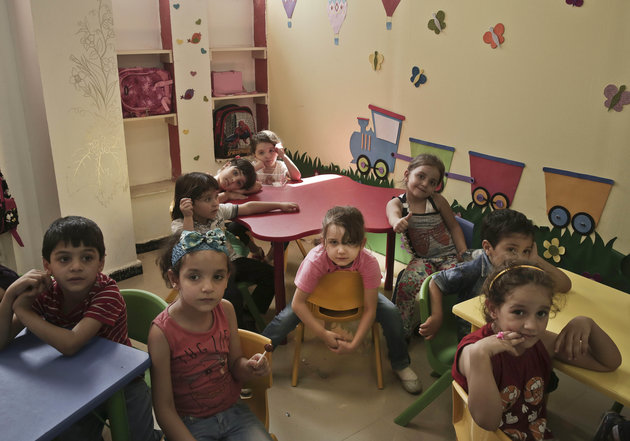 The center is led by Hossam Joubi, who worked as a teacher in the Syrian city of Aleppo for more than 30 years before he was forced to flee and still sports the tweed jacket and reading glasses of a veteran educator.

He said that the center, which is run by fellow refugees, is able to provide “psychological and social support” for the 500 students who attend classes there. “The Egyptian teachers might not be able to do that.”

Political discussions are not allowed. Joubi said the students are “already hurt by what they saw from destruction and devastation, so we try to make them forget this, through sports and other activities, such as arts, singing, acting and drawing.”

The center teaches the Egyptian national curriculum and has an agreement with an Egyptian private school, where the students take end-of-term exams and where their degrees will ultimately come from. Syrians have been allowed to register at Egyptian public schools since 2012, and about 35,000 are enrolled. Another 6,000 attend “non-formal education opportunities” like the center. 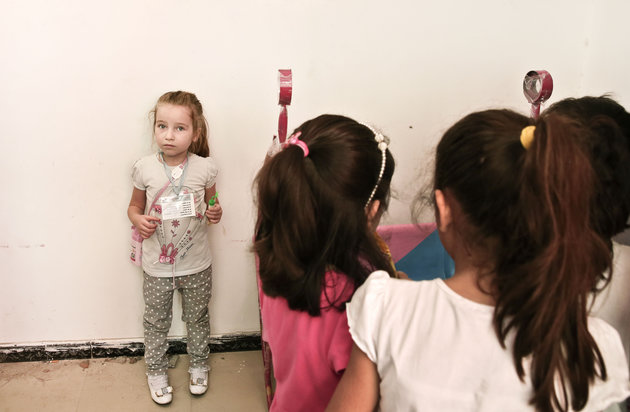 Mohammed Shawky, an education officer with the U.N. refugee agency, said private centers are “important for some children,” but funding is less sustainable and degrees less certain compared to public school.

“UNCHR is always advocating for more integration into the public education system, and more ownership from the government for these refugees — for sustainability issues,” he said.

A Syrian mother with three children enrolled at the center said Egyptians had initially offered to help when her family fled Damascus four years ago after government forces besieged their neighborhood and bombed it from the air.

But with time, they came to face harassment, and criminals targeted them because of their vulnerability. She was robbed shortly after arriving in Cairo, and she says an auto-rickshaw driver tried to kidnap her as she was riding with her youngest daughter.

She asked that she and her family members not be named, fearing for relatives still inside Syria.

Her 11-year-old son was bullied at his Egyptian public school, and on a recent day he had a cut on his nose from a fight with an Egyptian boy. “He suffered from a lot of harassment,” she said. “In the school, they said to my son, ‘You Syrians, you took our livelihood.’ Egyptians say that, while we open businesses and create jobs.”

She enrolled her son and two daughters at the center after he pleaded with her to move to a new school.

The family recently moved to a street populated almost entirely by other Syrians, where children ride bikes in the narrow road. Inside, their sparse living room is furnished with a fold-out table and chairs. A poster showing the multiplication tables hangs on the wall.

“You know your own countrymen,” the mother said. “My mind is at ease here…..the (Egyptians) are of one mind and we are of another.”