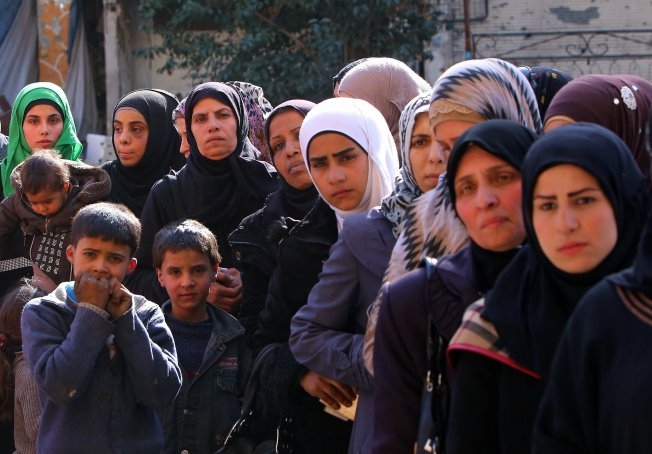 “What happened in Syria is a disaster,” Majd Chourbaji says. A Syrian activist from the city of Darayya, Chourbaji was jailed in December 2012 for calling on Bashar al-Assad’s regime to release political prisoners. She remained imprisoned for seven months, during which time her husband tried to look for her. He, too, was jailed, and died in prison after being tortured. The Syrian Civil War began four years ago Sunday, devastating the country. More than 210,000 people have been killed and more than 52 percent of the total Syrian population has been displaced, according to the latest U.N. report. (Exact numbers are difficult to calculate because the situation is constantly changing.) The majority of those displaced have fled from Assad and the Islamic State group, pouring over land borders into neighboring countries, with Jordan, Lebanon and Turkey bearing the largest burdens. Now a widow reunited with her three children in Lebanon, Chourbaji — a 2015 International Women of Courage honoree — helps run Women Now for Development centers to help Syrian women take on leadership roles in their communities and advocate for peace. Aid organizations, also strained for resources to provide humanitarian assistance, have found that female-headed households like Chourbaji’s are some of the most vulnerable. “Lebanon, as you know, does not have a strong economy. There’s no employment for Lebanese let alone Syrians,” Chourbaji, 33, tells U.S. News through an interpreter. “No health, no education.” Though there are camps for refugees in Turkey and Jordan, there are none in Lebanon. The majority of refugees in all countries tend to live in urban centers rather than in camps, which means aid organizations have to adapt to reach a population not easily concentrated in one area. Women and children have been particularly impacted by the refugee crisis. Many countries have severely restricted border crossings or closed their borders entirely in response to stress from the current refugee population as well as fear that terrorists could enter. The border closures present another problem: Syrians still desperate to escape have nowhere to go. “What we have told countries is they should absolutely take steps to protect their borders and to keep out any kind of flow of foreign fighters or would-be terrorists, but that we also would like them to let bona fide refugees, legitimate refugees, especially the most vulnerable people [like] families, women children, the elderly to get across,” says Anne Claire Richard, the assistant secretary of state for population, refugees and migration. The U.S. has provided $3.2 billion in humanitarian assistance since the start of the war four years ago, but still Syrians and aid workers say the international community is largely failing them. “At the core I would describe the Syrian revolution as the orphan revolution,” Chourbaji says, a knit scarf with the Syrian revolutionary flag of black, white and green draped around her neck. “I don’t feel there was any international support in solving the crisis.” In Jordan, there are nearly 625,000 registered refugees, but officials says the true number could be as high as 1.1 million. Thirty-six percent of refugees in Jordan are in female-headed households, and 50 percent are under the age of 18. This presents a host of challenges in a country with strained resources. According to CARE’s Jordan country director Salam Kanaan, it is difficult for families to have a sense of normalcy after everything they have been through; families may be uncomfortable to let their children go outside in an unfamiliar place, and some children are not attending school because of worries the walk will not be safe. Those refugee children that do attend need to adjust to new curricula and enormous class sizes — something that is beginning to impact Jordanian children as well. “It is going to be impacting the quality of education in Jordan for Jordanians, definitely. We’ve seen some results of that,” Kanaan says. “According to the Ministry of Education, they’re saying that Jordanians are not fairing very well in international tests as they used to before.” Child marriage is also on the rise. Some parents, overwhelmed by the prospect of providing for children in a strange place where they can’t legally work, marry off the girls as young as 10 because they can’t care for them. Kanaan says 25 percent of the registered marriages for Syrian refugees in Jordan are of girls between the ages of 13 and 16. Jordan’s legal age for marriage is 18, but there’s no such law in Syria. Like in Jordan, most Syrian refugees in Turkey also live in urban areas. There are 220,000 in camps but it is believed there are actually around 1.6 million Syrians in Turkey. About 75 percent are women and children under 18. Those who are registered have relatively good access to services like healthcare, education and housing, but many are not formally registered. Syrian refugees also stress the education and health systems in Turkey were not meant to serve so many people. The camps are run by the Turkish government, and Andrew Gardner, Turkey researcher for Amnesty International, says Turkey has done a lot more than many wealthier nations but is now starting to feel the burden.