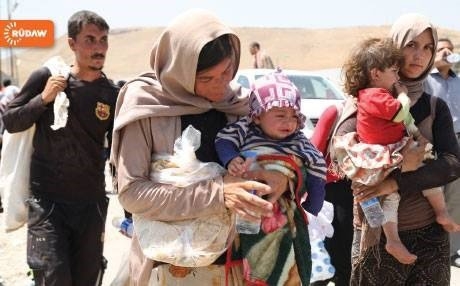 ERBIL, Kurdistan Region – As part of the Iraqi government’s efforts to help displaced families across the country, 19 billion Iraqi dinars (about $17 million) arrived in Erbil Tuesday for distribution among displaced families sheltering in the Kurdistan Region since August. “Every family is to receive 1 million Iraqi dinars (about $800) for basic needs,” said Alia Hussein, who is head of the Iraqi Migration Office in Erbil, adding that most families had already received the allocated amount. The Iraqi government allocated $1 billion for relief efforts and assisting displaced Iraqi and Syrian refugees, some of whom have been on the run since 2011. Some 1.5 million refugees have been accommodated in the three Kurdish provinces of Dohuk, Sulaimani and Erbil, according to UN estimates. Authorities in Kurdistan have called for international help as winter sweeps across the region. “In addition to the allocated money, we will provide every family with blankets and heating devices,” Hussein said. Most refugee families were accommodated in schools or unfinished construction sites, but have now been moved to six newly built camps across Kurdistan.