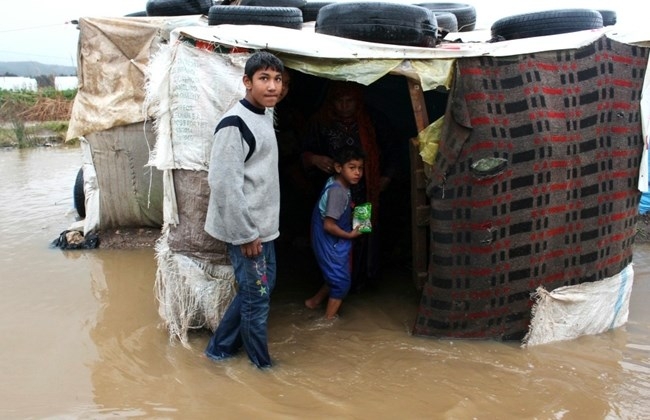 Amid a flurry of film crews, photographers and black SUVs, the UNHCR’s Antonio Guterres arrived at a tented settlement near Deir al-Ahmar last September. Abu Ahmad, a toothless and outspoken Syrian man who had fled ISIS-controlled Raqqa, approached Guterres and implored him for help. “We will be doing our best to support you, we know that your situation is very, very difficult,” Guterres told him. In February, Abu Ahmad and the refugees in his settlement still have no latrine, no water and no heating oil. They were forced to abandon their original settlement for higher ground in nearby Btedaai when the rain turned the ground beneath their feet into an impassable bog. During a recent cold snap families in the camp burned clothes and shoes to stay warm. Young children relieve themselves near their families’ tents, and grey-green mould has blighted their stores of potatoes, a staple food source. “We have gone from injustice in Raqqa to injustice here,” Abu Ahmad said. As the winter drags on, Abu Ahmad and refugees across Lebanon expressed a growing sense of resentment for aid organizations who, they say, have not fulfilled their promises. Humanitarian officers, however, say their efforts have been hampered by a lack of funding from the international community due to the politics of the crisis in Lebanon. “We’re used to [aid workers] coming here once a week and writing everything down, taking pictures and not coming back,” said Abu Shadi who lives in the same camp near Deir al- Ahmar. “They [aid workers] sit in air conditioning and heating and they’re taking big salaries, but they’re not doing anything for us,” Abu Ahmad snarled. The United Nations and aid agencies have provided lifesaving services to more than a million refugees in Lebanon. A massive winterization campaign helped more than 157,285 vulnerable refugees weather the cold in recent months, and heating oil has been distributed to tens of thousands of people. But funding from international donors has not been forthcoming. “We’re trying to do the best we can across all agencies with limited resources,” Ninette Kelley, the UHNCR’s representative in Lebanon told The Daily Star. “We’ve done massive work to reinforce shelters and provide stoves and blankets and fuel assistance, but people live in extremely difficult circumstances. The quality of life is very, very low.” But with camps spread across the country, reaching every Syrian in need has been a logistical challenge, said Fran Beytrison, Oxfam’s country representative in Lebanon. “In Lebanon, where refugees live in a range of informal settlements and collective shelters, we have wide areas to cover and do face people moving around all the time.” In Abu Ahmad’s camp many, but not all, of the refugees are registered with the United Nations. Some say they cannot afford to take a taxi to a UNHCR registration centre. Others say they were rejected when they tried to apply for refugee status. But even some refugees who are registered with the UNHCR say they aren’t receiving the most basic, lifesaving aid. Fatima, a 23-year-old Syrian woman who also fled ISIS, walks an hour and a half into the hills every day to search for firewood. She returns doubled over with a bulging bundle of kindling tied to her back. “It burns really quickly,” she said, rubbing her chapped hands together. Since there is no water in the camp, refugees drink from a nearby spring which they believe is polluted. Refugees in other camps across Lebanon also expressed frustration with their situation and with the humanitarian agencies charged with providing for them. Abu Jassem, a Syrian refugee who manages a tented settlement in Mar Elias, said that despite repeated calls to aid agencies and humanitarian workers, no one has come to check on the waterlogged camp which was badly damaged in a recent storm. “The camps are full of water, and a lot of things were destroyed,” he said. “I’ve called a lot of NGOs that I know, a lot of different agencies. They answered and said they would help but we haven’t received anything for two months … The last NGO that came here just looked around and didn’t help at all.” “We need wood and tarps to protect us from the water and the rain, and to allow the children to sleep … If I had the money I would buy it all myself,” Abu Jassem said, with mounting desperation in his voice. “We never received blankets or clothes,” said Faten, a refugee in Arsal. Unable to enter the town because of the precarious security situation, the United Nations has been working with partner organizations to reach refugees in the north eastern border town. Aid workers in Arsal, Faten said, show little sympathy for the refugees. “They don’t respect the people in front of them … They yell and don’t respect the elderly. They don’t treat us like victims, survivors of war,” she said. “I don’t feel like they’re doing their job.” Reflecting on the visit of Guterres, Bashir, a middle-aged refugee, looks grim as he recalls the onetime fanfare at his camp. “They benefitted, we didn’t,” the refugee said.