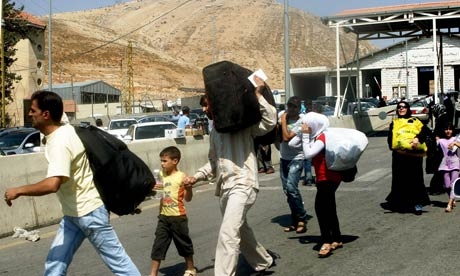 The Saudi national campaign for the relief of Syrian brethrens has handed over the third batch of cheques covering the renting allowance to the owners of residential apartments rented by the campaign in favor of as many as 65 new Syrian families in Lebanon. The cost of renting those apartments worth $50,000, organizers said. Waleed Al-Jalal, the Director of the Campaign in Lebanon, said this brings to 365 families sponsored by the campaign since the beginning of accommodating Syrian refugees in Lebanon, adding that the campaign is planning to hit the target of 1100 families within the third phase of the project. For his part, Dr. Badr bin Abdulrahman Al-Samhan, the Regional Director of the campaign, said the campaign is planning to launch a package of medical, educational, social and accommodation projects upon directives of the Custodian of the Two Holy Mosques King Salman bin Abdulaziz Al Saud and the direct supervision of Deputy Crown Prince Mohammed bin Naif bin Abdulaziz Al Saud, the Second Deputy Premier and Minister of Interior, who is also the General Supervisor of the Saudi Relief campaigns.