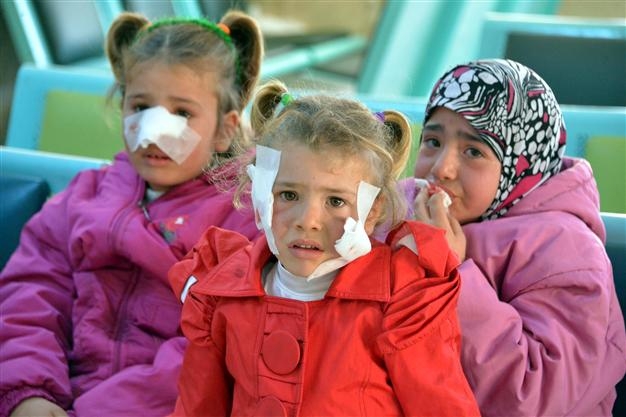 A skin infection that leaves marks has begun to infect the children of Syrian refugee families living in refugee camps and tents in the southern province of Adana. The children, who settled on their own means in some neighborhoods of Adana’s Yüreğir district, have been infected with Delhi boil, a skin infection caused by a single-celled parasite transmitted through fly bites. Some Syrian children living in refugee camps have also been affected. While a coordination center has been set up for the refugees in the Adana Public Hospital, the hospital personnel are working on the contagious disease. Refugee children struggling with the disease have accordingly been vaccinated in the hospital’s Infectious Diseases Unit. A Syrian woman, who escaped from the civil war in Syria and wanted to remain anonymous, said five of her children were infected with the Delhi boil simultaneously and that the disease would sweep through unless necessary precautions were taken. Delhi boil, which is found in the Mediterranean and Middle East, is more common in Turkey’s Eastern and Southeastern Anatolian regions. The disease is directly transmitted by sandflies and blackflies, and might vanish after one year with a possible scar on the skin. More than 1.5 million registered Syrian refugees have sought shelter in Turkey, according to the United Nations, while the unofficial number of Syrian refugees has been determined to be much higher.