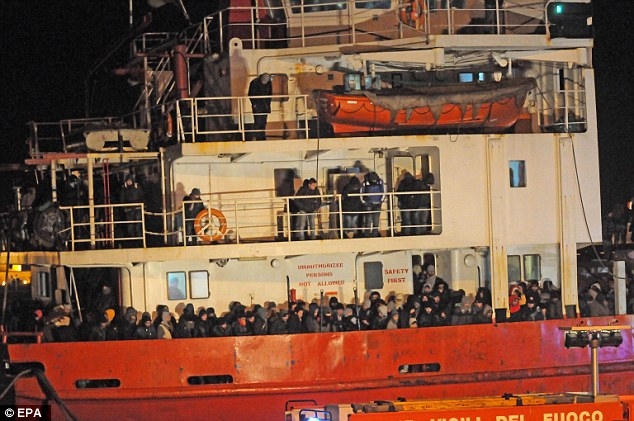 A Syrian refugee who piloted more than 700 illegal migrants on the Italian ‘Ghost Ship’ has claimed a trafficking gang offered him nearly £10,000 to be ‘captain’ of the abandoned vessel. Sarkas Rani, 36, took charge of the Blue Sky M, one of two large ships that were locked on a course towards Italian shores this week, with hundreds of Syrian asylum seekers on board. Mr Rani claims he was contacted by human traffickers who allegedly posted several messages on Facebook offering migrants covert passage to Europe for £3,500. The former sailor allegedly told police that he was offered free passage, $15,000 and the possibility of his family being sent to Italy too, if he captained the ship. Separately, police have revealed that human traffickers could have earned around £2million for taking more than 350 illegal migrants on a second ship that was intercepted by the Italian navy just 48 hours later. According to the Telegraph, an Italian newspaper reported comments made by Mr Rani during police interrogation after the ship was intercepted on New Year’s Eve. Mr Rani allegedly told police that the trafficking gang had asked him to commandeer the ship after finding out that he used to work as a sailor. He told officers that it would save the gang having to make an exit from the boat when it neared European waters. ‘They promised me $15,000 and the possibility of sending my entire family over,’ Mr Rani was reported as saying. The Blue Sky M, which was intercepted on Wednesday, had recently had its safety certificates withdrawn after it was ruled unseaworthy. It was originally heading for the port of Rijeka in Croatia, but the ship abruptly changed direction on Tuesday morning, heading west towards Italy. This is thought to have been when the smugglers abandoned their human cargo to its fate. According to reports, Mr Rani admitted leaving the bridge to hide among the migrant passengers once he set the autopilot toward Italy’s southern shore. By the time Italian naval officers boarded the ship, it was close to running aground in what could have led to a fatal sinking. After it docked in the Italian port of Gallipoli, hundreds of desperately cold men, women and children carrying their few remaining possessions were helped to safety. Wrapped in blankets, they stumbled off the ship to waiting aid workers and ambulances. One woman holding a young child collapsed and several had to be carried on stretchers. Many of the migrants had been forced to huddle for hours on the main deck, and more than 100 were treated for hypothermia. Mr Rani said his participation in the people-smuggling venture began when he left Lebanon, where he had sought refuge from the civil war ravaging Syria, to spend time in Turkey. He said that he and the other asylum seekers boarded the ship at Turkey’s Mersin port, which has become a haven for people-smuggling gangs trafficking refugees from the Syrian war into Europe. Two days later, the Ezadeen, carrying 360 migrant passengers, was intercepted by the Italian navy and towed to port. The Sierra Leone-flagged livestock carrier was found drifting without power about 40 nautical miles off the southern Italian coast. The police chief of Cosenza province, Luigi Liguori, told the BBC that each migrant had paid between $4,000 and $8,000 to board the ship. The migrants were said to have worn hoods and locked the migrants in the ship’s hold before abandoning ship. It had been put on a collision course for the Italian coast but ran out of fuel, officials said. Passengers are said to be in good condition and are being transferred to immigration centres and foster homes across Italy, according to coastguard and police officials. European border officials believe last week’s events represent part of a new tactic by trafficking gangs, who have started buying boats on the black market and then abandon them close to European shores. Last year it is estimated that nearly 3,500 refugees died trying to cross the Mediterranean while another 200,000 were rescued. But hundreds, and possibly thousands, have perished trying to make the crossing. Trafficking gangs send boats over in the knowledge that those who are picked up by the European authorities are likely to be granted asylum. The Turkish government has been accused of not doing enough to stem the flow of migrants from Syria. Illegal migration to the EU has been fuelled by the civil war in Syria, which has driven people to seek asylum in Europe, along with economic migrants.