Stricter Security Measure against Syrian Refugees In lebanon to Take Effect on Jan. 5 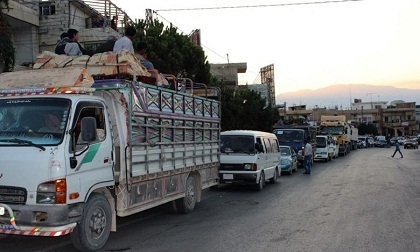 Interior Minister Nouhad al-Mashnouq requested on Saturday security agencies to begin implementing the state-approved strict measures limiting the flow of Syrian refugees into Lebanon, reported the daily al-Mustaqbal on Sunday. It said that the minister ordered the concerned officials to prepare to implement the measures starting January 5. A ministerial committee tasked with following up on the Syrian refugee file devised the measures. They call for obligating any Syrian to fill in a form explaining the reasons for entering Lebanon. They will also be requested to present proper identification papers at their entry. These conditions also include Syrians who are not seeking to travel to Lebanon as refugees. Lebanon has been struggling to support the burden of around 1.5. million Syrian refugees that have been pouring into the country since the eruption of the Syrian conflict in March 2011. The government recently introduced restrictions on refugees in an attempt to limit their numbers. Lebanon has all but shut its frontiers to new refugees, allowing only humanitarian exceptions across, and the state is beyond its absorption capacities and urgently needs other countries to share its burden. Earlier this week, Lebanon and the United Nations launched a plan that calls for an estimated $2.1 billion to help the country cope with the fallout from the conflict in neighbouring Syria. The Crisis Response Plan for Lebanon, announced Monday, outlines the priorities of the government and international community over the next two years. It aims to deliver humanitarian assistance to Syrian refugees while also expanding plans to invest in services and institutions in the most affected areas. It hopes to reach some 2.9 million people, half of them Lebanese.